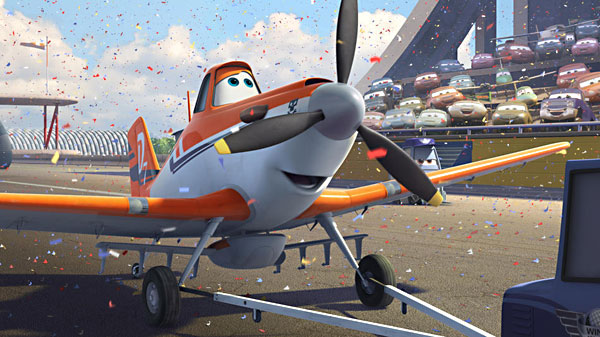 What a clunker. Though billed as coming from “the world of Cars” – that would be Pixar’s 2006 hit about talking race cars – this spin-off is a co-production of DisneyToon Studios and India’s Prana Animation Studios. (It was also reportedly first intended to go direct-to-DVD before reversing course for a theatrical release in the traditional dumping ground that is August.) None of that backstory would have mattered, of course, had Planes been a superior film, but it’s as low-flying as its crop-duster hero, Dusty Crophopper (vanilla-voiced by Dane Cook), who dreams of overcoming his humble origins and fear of heights to compete in an around-the-world aerial race.

A charmless, schematic, aspirational film, Planes scotches the visual promise teased in its globe-trotting premise; a pretty fly-by of the Taj Mahal is the only site on this world-geography sprint that stands out. And the script, by Jeffrey M. Howard (who previously penned a series of Tinker Bell movies for Disney), crudely draws the international assembly – a hot-blooded Mexican racer is trailed by mariachi players, while in India sacred cows have been replaced by tractors – and mistakes crassness for risk-taking. (If I were a parent, I would riot at the film’s chirpy reveal – SPOILER ALERT – that Old Yeller takes a bullet. By the way: Planes’ “spoiler alert” is a postscript, not a preface. Assholes.) The occasional amusing moment notwithstanding (a split-personality, German flying car got giggles for sheer bizarreness), Planes is a hunk of junk, its autopilot course set to buckets of money wrung from families looking for something like Lightning McQueen to strike again. No such luck.