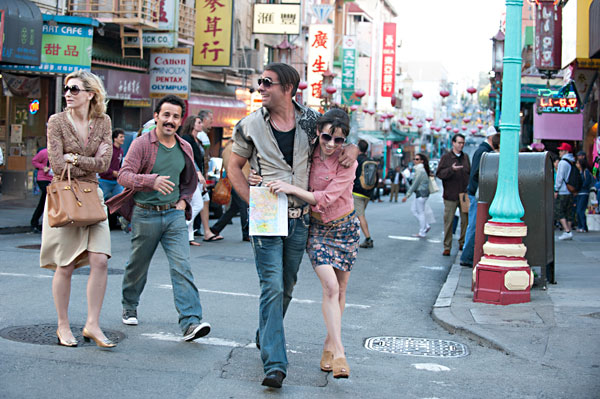 The Woody Allen mojo is at work in his latest film, which gets an extra boost from Cate Blanchett’s extraordinary performance as a Park Avenue matron brought low by the recent financial crisis. Drawing in equal measures from A Streetcar Named Desire and the real-life Ruth Madoff story, Blanchett plays the titular Jasmine as a woman aghast by and ill-equipped to deal with how low her circumstances have fallen. The last 20 years have been hit-or-miss for Allen, but Blue Jasmine is definitely one of the strongest works from these two decades. Neither a straight-out comedy nor drama, the film dabbles in both modes, creating an easygoing yet poignant observation of a woman and her mores. Jasmine is a woman on the verge of a nervous breakdown, but damned if she doesn’t seem fabulous, yet fatuous, on the way down.

Married to a financial whiz (Baldwin) who meets a Bernie Madoff-like end, Jasmine claims to have had no knowledge of her spouse’s swindles. Once he goes to prison, Jasmine decamps to Brooklyn (horrors!) before moving cross-country to crash with her sister Ginger (Hawkins) in San Francisco. A study in contrasts, Ginger is the comfortable lowbrow to Jasmine’s effete highbrow. In particular, Jasmine has taken a strong dislike to all the men in Ginger’s life, from her loutish ex-husband (Clay, in a surprisingly unaffected performance) and her current dolt of a boyfriend (Cannavale) to her fling with a deceptive no-goodnik (C.K.). All the while, Jasmine ranges between unrealistic fantasies and harsh reality checks. Your heart will break for her one second before wanting to slap her silly the next. The saga unfolds in a fairly charming fashion, and only Allen’s abrupt ending breaks the spell. Clearly, the filmmaker has no more ideas than Jasmine about how to resolve her predicament. When we leave her, Jasmine is still on the verge, and we sense there’s no butterfly waiting to arise. Allen seems to have bitten off more modern reality than he knows what to do with. But until that point, his observations about class differences and the shambles of life are spot-on.