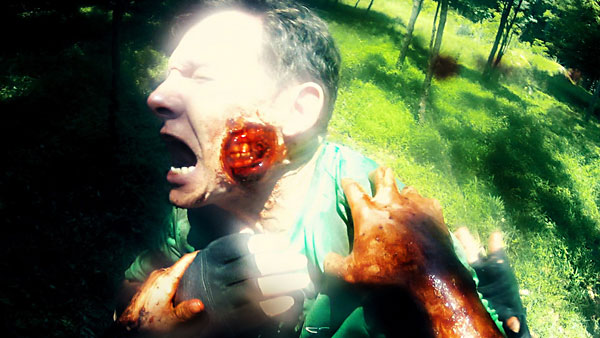 This horror-anthology sequel might be scary or disturbing if we were actually able to see most of it. But following in the found-footage mode of horror storytelling (a mode that two of this film’s seven filmmakers – producer Gregg Hale and director Eduardo Sánchez – helped usher in with The Blair Witch Project), almost all of the imagery is of the low-light, shaky-cam variety. A wraparound story about a couple of sleazy detectives uncovering a cache of videotapes and digital footage unites the four short films in this package. None of the pieces is terribly original in concept, the performances are mostly as shaky as the camerawork, and the connecting thread is stretched pretty thin. They are all variants on otherworldly snuff films in which nightmarish creatures attack the nominal heroes.

Adam Wingard (director of next month’s hotly anticipated release You’re Next) directs and stars in the first short film, “Phase 1 Clinical Trials,” about a man with a surgically installed camera eye in his head who, not surprisingly, sees very bad things. In the second segment, “A Ride in the Park,” directed by Hale and Sánchez, a man goes for a bike ride with a camera attached to his helmet and is attacked by zombielike things. In the longest and most intriguing segment, “Safe Haven,” directed by Timo Tjahjanto and Gareth Huw Evans (The Raid: Redemption), a film crew visits a doomsday cult and gets more doomsday than they bargained for. “Slumber Party Alien Abduction,” directed by Jason Eisener (Hobo With a Shotgun), plays out like a home movie in which, once again, very bad creatures wreak havoc. Horror writer Simon Barrett directs the wraparound film titled “Tape 49,” which is the weakest link in the bunch. V/H/S/2 is for gore hounds exclusively.

Autoerotic
Sex in the modern age may be demystified, but it remains confusing in these four tales about sexual perplexity among unnamed Chicago residents.