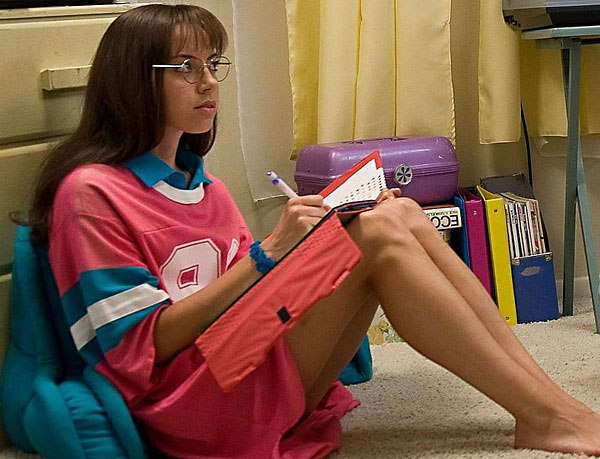 Teenage boys losing it at the movies? Been there, done that. But girls’ loss of virginity? That is a tale less told, at least in American mainstream cinema; when the topic does come up, it’s usually treated as a cautionary tale or with kid gloves and soft-focus squishiness. The only thing going squish here is sexual fluid in service of a punchline, with the jokes consistently hitting in this gynocentric gross-out comedy.

Parks and Recreation’s eternally deadpan Aubrey Plaza plays Brandy, a know-it-all and proud nerd in Boise, Idaho, circa 1993. Straight-and-narrow Brandy at first seems impervious to life’s squiggles – like humor, subtlety, and frivolity – but when her friends (Shawkat and Steele) drag her to a kegger, Brandy’s eyes are opened to the possibilities of sex. As beach-blond doof Rusty Waters (Friday Night Lights’ Porter) strums an acoustic version of Def Leppard’s “Pour Some Sugar on Me,” Brandy licks her lips, erotic heat coursing up her body as clearly as a cartoon thermostat. We are witnessing no less than the sexual awakening of Brandy Klark, and Plaza – a deadly serious comic actress – is not fucking around about it. The moment is sublime.

Mostly The To Do List’s delights are more earthbound – think gutter-adjacent. As Brandy decides she will lose her virginity to Rusty by summer’s end, she embarks on a sex-training spree with a variety of guys, ticking off boxes like “finger-banging” and “dry-humping” as mere preliminary heats to the big lay. The language and material are hard-R, although the most visually explicit thing seen here is a hand trawling under underwear; still, we all know the sight of an adult engaging in a consensual sex act with herself gives the ratings board the vapors. In fact, there’s something rather retro-sweet about The To Do List, with its pre-Internet confusion (see Brandy searching an Encyclopedia Britannica fruitlessly for “rim job”) and the wide berth it gives actual issues of sexual politics. While first-time writer/director (and University of Texas alum) Maggie Carey’s The To Do List inserts a perfunctory grope at a message, this really isn’t that kind of a movie. (Nor would Plaza be the person to sell it; her all-in performance-art aesthetic is admirable, but arousing empathy doesn’t seem to interest her.) Maybe someday there will be a better commercial comedy about a girl taking charge of her sexual education, but for now, this is the only one we’ve got, and it’s a filthy-fun charmer.

See “Another Notch in the Chastity Belt,” for an interview with Maggie Carey. What a 'To Do'
Maggie Carey talks about improv, Clinton, and her daughters' convent