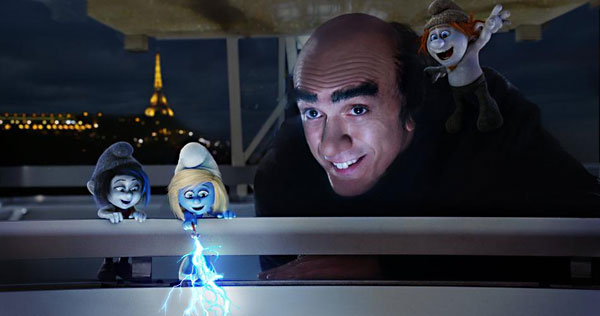 Does the world need another movie about a bunch of miniature, blue-skinned humanoids with bulbous noses and perky bobtails; gnomelike creatures who wear floppy caps, live in mushrooms, and use the word “smurf” in every other sentence? Someone apparently thinks so. The 3-D, live-action/animated film The Smurfs 2 takes up where its wildly successful 2011 predecessor (worldwide gross: $564 million) left off, as the malevolent magician Gargamel (Azaria) and his feline accomplice Azrael once again scheme to extract mystical Smurf essence in a diabolical plan to rule the world. Aiding and abetting these evildoers are Gargamel’s unloved Naughties offspring, Vexy (Ricci) and Hackus (Smoove), two would-be Smurfs who dress like hipsters and talk like stoners. (Yes, we’ve come a long way from Belgian comics artist Peyo’s original vision for his cartoon characters back in 1958.) From an adult’s perspective, the narrative makes little sense – the cadre of screenwriters seemingly pulls most of the plot elements out of thin air – but the kids won’t mind. They’ll find it all perfectly smurfy.

Where the first installment of the franchise largely takes place in New York City, the setting of its successor is the City of Lights, prominently featuring Notre Dame Cathedral, the Eiffel Tower, the Louvre, and the Paris Opera House, where Gargamel nastily waves his magic wand to the perverse delight of packed Parisian audiences every night. (Not surprising when you think of it: After all, the French also love Jerry Lewis.) It’s a clever way to introduce youngsters to one of the world’s most beautiful cities, made all the more beautiful by the film’s stellar production values. And for their parents, the travelogue provides a welcome distraction from the hocus-pocus storyline and the relative absence of subtext, though Vanity (Oliver)– a foppish Smurf who carries a hand mirror and speaks with an affected accent – may strike them as the gayest animated character since the Great Gazoo on The Flintstones.

It’s hard to say who comes off better in The Smurfs 2: the animated Smurfs or the human beings with whom they interact. As the balding, orthodontically challenged villain, Azaria appears to be having a ball, though his gleeful badness registers as an inside joke much of the time, which may be intentional. (To Azaria’s credit, the bucktooth prosthetic must have been a bitch to wear.) Harris pretty much plays straight man, though he’s given a zinger or two to maintain his reputation. As for the multitude of blue guys (and the single gal, Smurfette, voiced by Perry), they’re no Seven Dwarfs, though the sonorous voice of the late Winters in the role of wise Papa Smurf will have old-timers pine for the zaniness that comic genius could inspire in his prime. If only The Smurfs 2 had a smidgen of that madness. 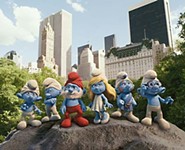 The Smurfs
Line up for your innoculations: We've been Smurfed.