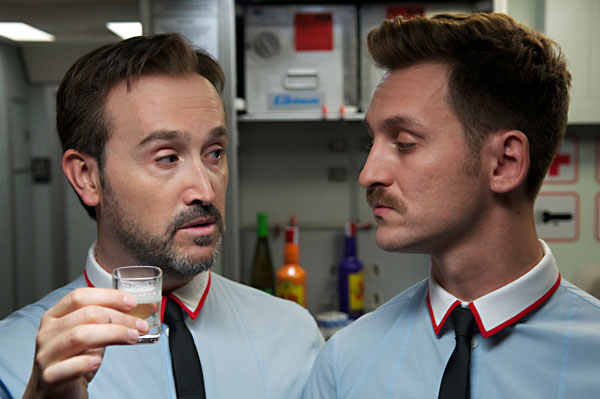 Here’s one movie I can guarantee you’ll never see on an airplane. Even with opening disclaimers that I’m So Excited! is a work of fiction and bears no relationship to reality, this Almodóvar romp presents an unsettling portrait of mile-high behavior. On a trans-Atlantic flight from Madrid to Mexico City, a technical malfunction that’s discovered while the plane is still in Spanish airspace causes the pilot to steer the plane in circles while waiting for clearance to land on a vacant runway. That allows Almodóvar time to run his characters through some aimless loops as well.

I’m So Excited! is something of a return to form for Almodóvar. It’s the kind of madcap comedy the filmmaker made more commonly in the earlier part of his career. It’s not as zany a frolic as Women on the Verge of a Nervous Breakdown, but it’s pleasantly amusing, if a bit undercooked. The film is something of a roundelay, bouncing variously among a handful of characters, each of whom is a piece of work. The story is confined to the half-dozen travelers in business class (all the passengers in coach have been drugged by the flight attendants so they will stay passively zonked out during the flight); the three campy, male flight attendants; and the captain and co-pilot, both bisexual (and actively so while in the cockpit) and downing alcohol throughout the flight. A bit of everyone’s backstory is revealed, sexual relations are enjoyed by many, and much gossip and many drugs are shared. A cute preamble prior to takeoff features Almodóvar mainstays Antonio Banderas and Penélope Cruz as ground-crew workers.

Even though I’m So Excited! doesn’t soar, the film is a fun flight. Maybe it needs a central character in whom the audience can invest themselves instead of flitting among a rogues’ gallery of kooky archetypes. Or maybe the film is undone by the standards of froth that Almodóvar previously set for himself. Whatever the case, I’m So Excited! sets the bar a little too high with that exclamation point in the title.