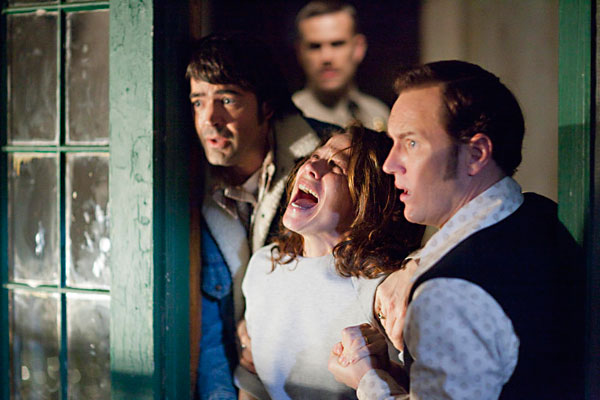 The Conjuring uses every parlor trick imaginable to scare up a scream: deafening door-slams, ghostly apparitions, demonic cackling, levitating chairs. The seen-it-all-before elements of this supernatural thriller directed by the filmmaker who gave us Saw, however, are more hoary than horrific. It might as well be retitled The Amityville Exorcist.

Purportedly based on a true story – aren’t they all? – the film largely takes place in the haunted Rhode Island farmhouse recently inhabited by the Perron family. The spooks waste no time terrorizing Roger (Livingston), Carolyn (Taylor), and their five daughters in the new home with the mysteriously boarded-up basement. (Clue No. 1, followed by Clue No. 2: the family dog that refuses to enter the house.) Soon, things don’t merely go bump in the night; they crash, boom, and clatter with the volume turned way up. The preternatural funny business escalates as unseen hands tug on sleeping bodies, and the dead make spectral appearances. Enter husband-and-wife paranormal investigators, Ed and Lorraine Warren (Wilson and Farmiga), to cleanse the house of the demonic spirit that possesses mothers to kill their young, just as it did centuries ago. Before you know it, crucifixes are bared and the holy water is flying as the fiercely Catholic Warrens engage in holy battle with straight-out-of-hell evil. The power of Christ – or something along those lines – is needed to compel a straight face during all of this ear-splitting nonsense.

Aside from its blatant thievery, the bedeviled The Conjuring falls short for other reasons, most notably as a result of an odd narrative structure in which the Perrons and the Warrens vie for the audience’s sympathies. When the film diverts attention to the latter in an unnecessary sequence involving a creepy doll named Annabelle, any momentum achieved by the indiscriminate events in the haunted household is irretrievably lost. At this point, the film almost stops dead in its tracks, only to be dragged kicking and screaming to conclusion by a series of events damaging its credibility as a true story. The Conjuring wants it both ways, alleging veracity to legitimize its premise and then using familiar (read: overused) tactics to scare the bejesus out of you. It’s enough to make your head turn 360 degrees.