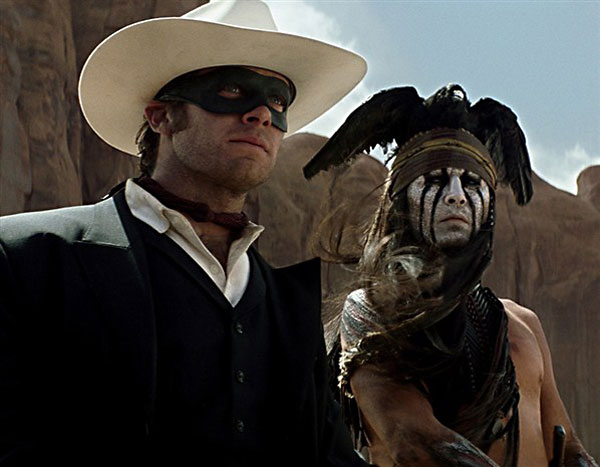 If you want to see Johnny Depp in a revisionist Western, check out 2011’s Rango, in which the actor gives voice to an animated chameleon in a Wild West town, or Jim Jarmusch’s Dead Man from 1995, in which Depp plays an Eastern accountant who takes the train west to the end of the line where he encounters a world both comic and violent, guided into the spirit world by a Native American named Nobody. But reuniting here with his Rango and Pirates of the Caribbean director Gore Verbinski for a culturally evolved retelling of the radio and TV legend of the Lone Ranger and Tonto, Depp does the modern Western few favors. With his name above the title, but playing Tonto, the Indian guide who was traditionally subordinate to the titular character, Depp in The Lone Ranger is stuck inside a Western without a compass. The tone of this film wanders and is at various times humorous, violent, and chaotic, but mostly feels dusty and overly long.

Title aside, The Lone Ranger achieves its goal of telling the story of Tonto, presenting him not as the hero’s sidekick or the “noble savage” of past incarnations, but as a man with his own history and destiny, traveling on a path which, for a while, intersects with that of the man who comes to be known as the Lone Ranger. Although this new Tonto isn’t servile and doesn’t speak in pidgin English, he is not the average Indian either. Tonto becomes another of Depp’s wonderfully idiosyncratic characters, as unique in his way as Edward Scissorhands, Captain Jack Sparrow, or Willy Wonka. Facially covered with bone-white paint accented by four black, vertical lines and a dead crow on his head, Depp uses these accoutrements to mug and deadpan in an entertaining fashion. Poor Armie Hammer as the earnest John Reid who morphs into the Lone Ranger (with much guidance from Tonto), instead flashes the whitest teeth in the West and wanly plays the unwelcome companion to the story’s central figure, Tonto. The story’s villains – gunman Butch Cavendish (Fichtner) and railroad baron and war hero Latham Cole (Wilkinson) – are ornery but not too frightful, despite the film’s plentiful carnage. Helena Bonham Carter as a madam whose ivory pegleg is equipped with a rifle seems to have hobbled in from another movie.

Despite these weaknesses, Verbinski’s film would be more passable if it didn’t just seem too damn long. The story is encased in a flashback structure set in 1933 San Francisco in which Tonto is an old man portraying the “noble savage” (as the exhibit identifies him) in a carnival sideshow diorama. As an old man recounting the true version to a young visitor (Cook), Tonto calls to mind memories of Little Big Man. Yet with visions of bank robberies among the more virtuous derring-do and greedy exploitation of the Cherokees by the white invaders, it’s impossible to know how much of Tonto’s story is tall tale or historical fact. The tactic undercuts the film’s attempt at revisionism or at best equalizes men of all races as untrustworthy tellers of of their own history. The Lone Ranger stokes the legend but its smoke signals only add to the haze.

Rango
Watch out, cartoon critters: There’s a new sheriff in town, and his name is Rango.