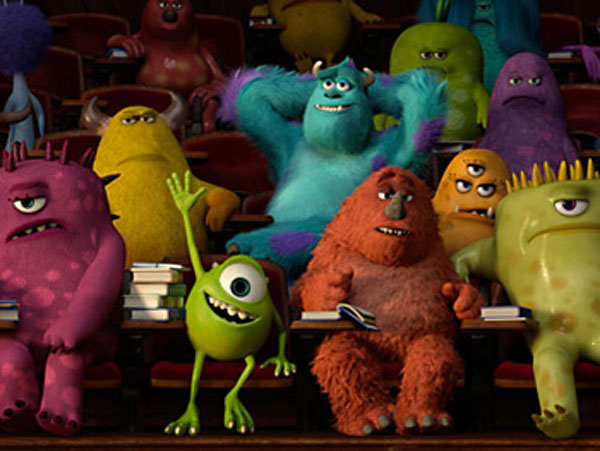 Remember the nifty idea behind Monsters, Inc., wherein the city of Monstropolis was powered by the shrieks of human children, mined by professional monster “scarers”? It put a face on the thing that goes bump in the night – a blue, no-neck giant named Sulley (Goodman) with a head like a fat thumb – and made a hero out of him, too. A dozen years later, the movie hasn’t aged one lick, but this prequel – which jogs back to the college days of future Monsters, Inc. employees Sulley and Mike Wazowski (Crystal) – arrives already stale. There’s no invention here, no bold new strokes, only doodling on the dynamo concept of the first film. As for the actual brush strokes: My Monsters, Inc. Blu-ray renders images more vibrant and tactile than the dim, cruddy 3-D here.

Monsters University follows first-year Scaring School students Sulley and Mike, rivals and a study in contrasts: Sulley is all instinct and letterman charm, while Mike (he’s the diminutive eyeball on stick legs) is book-smart but far from a natural. The script (by Robert L. Baird, Daniel Gerson, and director Dan Scanlon) has a couple of laugh-out-loud moments (Muppet-voiced Charlie Day, as a nerdy wannabe scarer, delivers the biggest howler, even if it fits better on his It’s Always Sunny in Philadelphia acid-comedy than in G-rated entertainment), and composer Randy Newman keeps the energy level high with his drumline-heavy score. But mostly this is shrugging stuff – clever but never inspired, dutiful but not possessing any of that ineffable magic of Pixar past.

Pity the kid tagged early as gifted and talented; anything less than exceptional is labeled a fiasco. Would I chide Monsters University for mere competence if Pixar didn’t have that first 15-year stretch of transportive animations on its transcript, before losing its shine with Cars 2 and the better-but-still-underwhelming Brave? Probably not – I mean, it’s not like Monsters University is a bad movie. It’s just not a terribly interesting one. 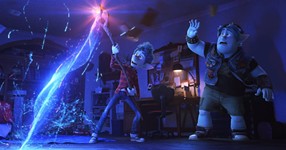