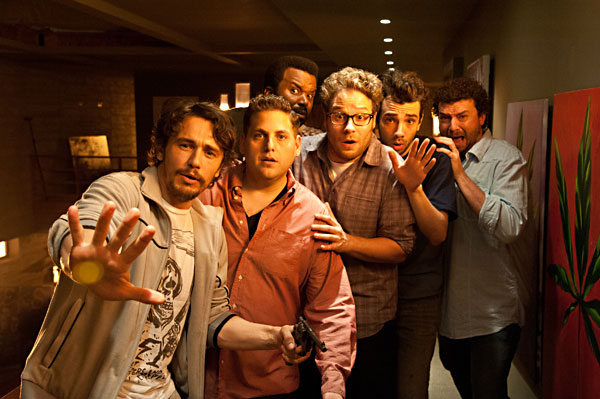 This Is the End

The apocalypse is nigh. It’s a theme that’s showing up with greater frequency in our films. And though the apocalypse is quite literal in this comedy, This Is the End may also signal the end of the creative road for the kind of raunchy, Judd Apatow school of bromantic comedies that have dominated our screens in recent years. For all its celebration of weed, self-absorption, and phallocentric humor, This Is the End also seeks redemption for its survivors of the apocalypse. These guys, too, want to get into heaven.

This Is the End is a comedy/disaster-film hybrid that’s written and directed by the team of Evan Goldberg and Seth Rogen (who also wrote Superbad, Pineapple Express, and The Green Hornet), and it's based on a short film they made in 2007 called “Jay and Seth Versus the Apocalypse.” Mixed with the vulgar bro humor are images of giant sinkholes to hell, the redeemed transporting up to heaven in blue sheaths of light, and giant, satanic beasts sporting huge, swinging dicks. The film is frequently hilarious, but overindulgent and too long by at least 15 minutes. (The first trim I’d suggest would be Channing Tatum’s embarrassing cameo.)

Self-referential to the max, the movie is premised on the idea that these actors are playing themselves. Jay Baruchel is visiting his old Canadian pal, Seth Rogen, in L.A. when Rogen suggests they go to a party at James Franco’s house. Baruchel, expressing his dislike of Hollywood pretense and phoniness, doesn’t want to go, but they go anyway. Franco, playing off his reputation for being arty and ambiguous, is showing off his new home, and the party is populated by a who’s who of young Hollywood talent. Over there, Craig Robinson, wearing a T-shirt that reads “Take Yo’ Panties Off,” sings a song to Rihanna (who’s singing along) about – well, you guessed it – taking her panties off. In another corner, Michael Cera, playing against type, is snorting scads of coke and behaving like an asshole. Jonah Hill oozes sincerity with the kind of inauthenticity Baruchel feared. Then the apocalypse arrives and a giant sinkhole opens up outside Franco’s front door, swallowing up most of the miscreant party guests. Barricading themselves inside Franco’s fortresslike dwelling, the aforementioned (minus Cera, who pays spectacularly for his sinful ways) go into survival mode. Soon, Danny McBride (who hadn’t been invited to the party) joins them and obnoxiously squanders their food and water, while spreading his semen all over the house (the source of a very funny shouting match between McBride and Franco over where it’s acceptable to leave one’s man juice). The squabbles go on and on, and there are the requisite scenes of men bedding down together. Emma Watson (Harry Potter’s Hermione) breaks in and becomes fodder for a rape joke that’s initially funny but like most sequences in the film, goes on too long. To pass the time, the guys shoot a sequel to Pineapple Express with the camera Franco retained from 127 Hours. References to other films abound.

Maybe it has something to do with Jewish writers riffing on the apocalypse, but This Is the End doesn’t really know how to end. Once circumstances force them to flee Franco’s compound, the survivors actually get caught up by the idea of redemption – and self-sacrificing acts of kindness are not really this group’s forte. Yet even with this film’s comedy strategy being the “let ’em all fly and see what sticks” approach, it’s amazing how adhesive so much of this is. 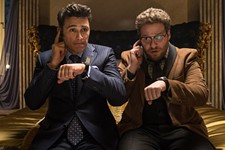 The Interview
See how a goofy comedy can spark an international incident.