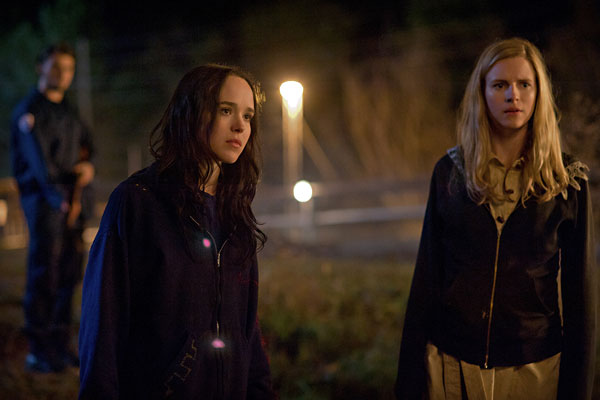 2011’s breakout “It" girl, Brit Marling, reunites with her co-screenwriter and director of Sound of My Voice, Zal Batmanglij, for another crypto thriller in which she again stars. This time, however, Marling plays a character on the opposite end of the drama: In Sound of My Voice, she plays a spectral-like figure from the future who is the leader of a cult infiltrated by undercover filmmakers; in The East, however, the multi-hyphenate plays the infiltrator of a group of dangerous, anti-corporate activists called the East, who choreograph events they call “jams,” which are designed to give captains of industry a taste of their own medicine (and in the case of a pharmaceutical company, that fate is most literal).

Marling plays Jane, an undercover operative working for a security company (headed by an iron-willed Patricia Clarkson) that specializes in protecting corporate clients from terrorist attacks by groups like the East. In short order, Jane tells her live-in boyfriend that she is taking off for a work assignment in Dubai (a deception echoed by NSA leaker Edward Snowden, who left his job and girlfriend under false pretenses) and embarks on a subterfuge in which she remains on American soil, dyes her hair, removes the crucifix from around her neck, and adopts the name Sarah. Voilà: She’s ready to join the underground. Once she enters the East’s lair, she meets little suspicion even though Izzy (Page), the group’s truest believer, thinks Sarah smells a little too much of soap.

The East starts off strong as we witness Jane/Sarah’s infiltration of the group and observe the community’s dynamics. Watching them carry out the first of what they warn will be several jams to come is intriguing as the details are held very close to the vest. Yet after a while, the course of the film becomes fairly predictable. Jane/Sarah grows increasingly conflicted, realizing that she shares many of the East’s beliefs about the exposure of corporate malfeasance but disagrees with their methods, which are terroristic and vindictive. Unsurprisingly, she also falls in love with the group’s unofficial leader, Benji (Skarsgård), subsuming some of the film’s political currency with romantic loyalties. None of the radicals is terribly well fleshed out as a distinct character; only Toby Kebbell as Doc conveys any nuance. Still, the film (which is produced by Scott Free, Ridley Scott’s production company) looks good (nod to cinematographer Roman Vasyanov). The images are sharp even when the film’s ideas are not. 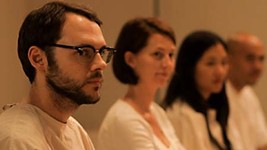 Sound of My Voice
This festival favorite marks an impressive film debut for its director and star, but its sum total is less satisfying than its parts.