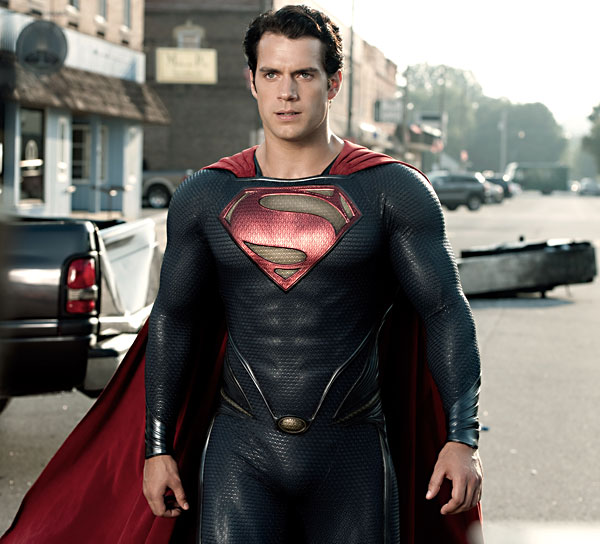 Man of Steel is as square as Superman’s storied jaw. Peel away the pyrotechnics and digital flimflam and what you’ve got is an earnest call to civic duty, a paean to America told in close-ups of the flag flapping majestically and No. 2 pencils freshly shaved. You might wonder why Hollywood keeps outsourcing our national comic-book icons to British actors, but put your hand back down: Man of Steel – grave and emphatic, intermittently ravishing and punishingly self-serious – isn’t taking questions.

The absence of fun or frippery will surprise no one who’s eyed the credits: Director Zack Snyder (Sucker Punch, Watchmen, 300) and producer/story co-conceiver and DC Comics movie stablemate Christopher Nolan (the Batman franchise) are soul brothers in grim-faced, frantic entertainments. (Let’s call composer Hans Zimmer a first cousin; when he trots out his braaaaaaam belch from Inception, the viewer’s liable to suffer heartburn and wistful memories of John Williams’ spirits-lifting score from 1978’s Superman.) But Man of Steel isn’t as heavy as the Dark Knight films – Superman’s lighter on his feet, after all – and while it seems no comic-book character these days makes the leap to screen without emotional baggage, screenwriter David S. Goyer (Batman Begins) resists the trend to make Kal-El flat-out tortured.

Not that Superman (Cavill) doesn’t have much to lament: He’s the last son of Krypton, his planet’s – and parents’ – demise forcefully dramatized in an extended prologue that also introduces the traitorous General Zod (Shannon). Considering Superman’s backstory is probably better embedded in our collective consciousness than that of our Founding Fathers’, the script smartly scraps a linear plotting of baby Kal-El’s evolution from alien émigré into the Kansas-bred loner, Clark Kent, and finally the caped savior of the human race. Instead, impressionistic flashbacks vividly convey Clark’s coming-of-age – his push/pull between service and a quiet life incognito, what fresh hell it is being “super” when you just want to fit in at junior high – and these scenes of heightened sensitivity and amber-waves-of-grain lighting linger long in the memory, even as the story eventually, predictably, cedes itself over to endless mayhem. Man of Steel falls in line with the contemporary action-movie adage that more is more, with much hurling of bodies and bashing through buildings and a ridiculous amount of artillery spent when any idiot can see bullets bounce off Zod like PEZ candy. None of that zings quite so much as the relatively low-tech spectacle of Zod and Superman hovering in mid-air and simply socking each other like respectable comic-book characters should.

Snyder has cast Man of Steel with dramatic actors, not action stars, and it pays off. Diane Lane, as Clark’s adoptive mother, has a sotto voce bonding session with her young son that will wetly blur more than a few 3-D glasses, and Amy Adams is terrific as the tough but tender Daily Planet reporter Lois Lane; she and Cavill spark like mad, but the filmmakers weirdly keep dampening their charge. And what of Cavill, our new man of steel, little known stateside but for a supporting part on Showtime’s The Tudors? When given the chance to actually act, he’s good, with shades of greatness – much like the film built around him.