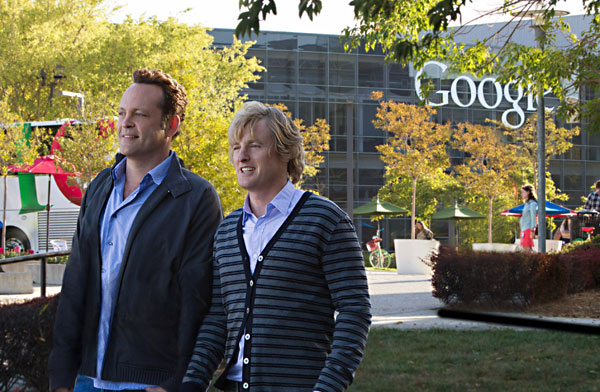 If you’ve ever thought to yourself, “Yeah, I use Google – as a search engine, a map, a translator, a verb – but I wish there was a way to get more Google in my life,” then you’re in luck: The Hollywood skies have parted to produce an entire comedy fashioned around the ubiquitous Internet company and its “lifestyle,” up to and including closing credits that helpfully demo Google’s product line for the audience-slash-consumer.

Actually, the peek into Google’s California headquarters is a sidelong enjoyment of this perfectly passable comedy co-written by Jared Stern and star Vince Vaughn (in his first writing credit since 2009’s Couples Retreat), and directed by Shawn Levy (the Night at the Museum series). The Internship reunites Vaughn with his Wedding Crashers compadre, Owen Wilson, to play newly unemployed watch salesmen (because who uses watches anymore?) who find new direction by bedding down with the enemy – technology – as over-the-hill interns at Google. They are middle-aged, digital Neanderthals stumbling through a sea of tech-savvy babes in Toyland (self-driving cars, napping pods, and Quidditch club, oh my!), but you can bet a pretty bitcoin that the lunkheaded duo, after initial adversity and age-shaming, will teach these whippersnappers a thing or two about the importance of IRL human interaction (insert Google logo here.) Product placement aside, there’s an admirable, even sweet, message about fellowship and misfit pride shot through the whole script, and Vaughn is rather touching as a kind of cuddly uncle figure to his fellow interns. Indeed, if it weren’t for a scene set at a high-end strip club – something to balance out all those brainy girls in glasses, I suppose – this would be strictly PG material.