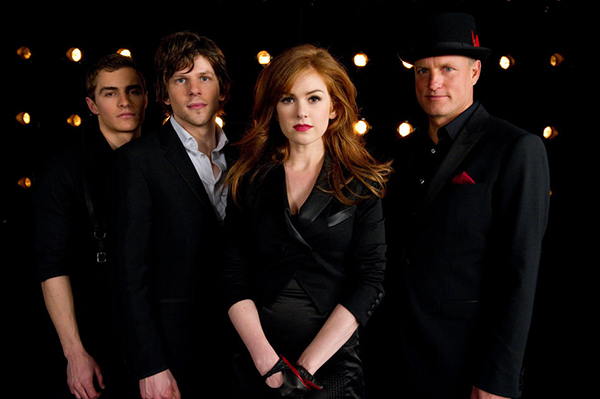 Now You See Me

“The closer you look, the less you see,” a magician warns onlookers at the start of this caper film. But by the end, the statement becomes an unintentional tip-off to the unconvincing underpinnings of Now You See Me. The film takes the intriguing premise – a team of magicians who seemingly conduct bank heists during their stage show – and an interesting cast, and then fails to develop these elements into something more cohesive than their individual parts.

After introducing us to four disparate American magicians – smug J. Daniel Atlas (Eisenberg), his former assistant Henley Reeves (Fisher), mentalist Merritt McKinney, and pickpocket Jack Wilder (Franco) – at the start of the film, each one receives a tarot card that beckons them to a mysterious meeting point. Cut to one year later, whereupon they have morphed into the Four Horsemen, a prestidigitating supergroup that’s playing a whirlwind series of arena shows, which they fly to on the private jet of their sponsor Arthur Tressler (Caine). Also following their tour is Thaddeus Bradley (Freeman), a magic debunker who really serves no narrative purpose but to explain some of the mechanics of how the magic is created. After the group’s opening show at the MGM Grand in Las Vegas – during which a bank in Paris is robbed and the purloined loot rains down on the delighted audience – the foursome is additionally pursued by FBI man Dylan Rhodes (Ruffalo) and Interpol agent Alma Dray (Laurent).

Now You See Me tries to work like a good magic act, using misdirection to draw the audience in deeper, but the effect is more like a three-ring circus in which the activities seem random and uncoalesced. The big reveal – as devised by screenwriters Ed Solomon, Boaz Yakin, and Edward Ricourt – of who’s pulling the strings behind this elaborate caper seems rather doubtful at the time, and even more so in retrospect. The impact of the Four Horsemen, the marquee act, is diluted by the choice to devote so much screen time to other characters. Director Leterrier keeps the camera moving and swooping throughout the film as if the Steadicam were another device in the magicians’ tool belt. A clear sense of space and sleight-of-hand is rarely achieved. Although Now You See Me lures us with its razzle-dazzle, the film really has little up its sleeve. 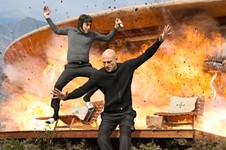