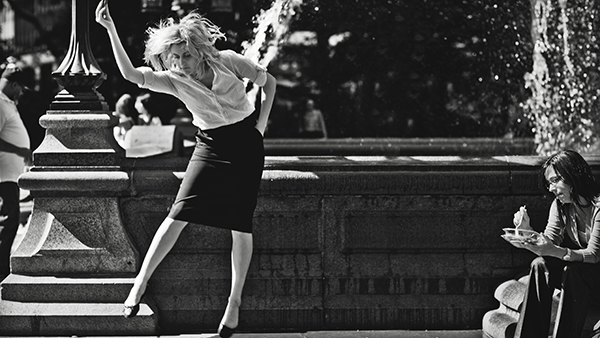 Noah Baumbach specializes in character studies, and Frances Ha’s Frances Halliday – portrayed and co-conceived by Greta Gerwig, who shares screenwriting credit – is a study in contradictions. A modern dancer whose career is winding down before it ever really got going, Frances is gorgeous yet ungainly; sturdily built but a bit of a flibbertigibbet; and 27 going on 14. She is ill at ease with romance – she makes a honking noise like a human error message when a man overtures a kiss – but no matter: Frances already has a love of her life, and she’s named Sophie (Sumner). Sophie is Frances’ best friend, co-conspirator, and roommate, and she is moving out of their Brooklyn apartment to test out the world alone. Frances is lost without her.

Baumbach and Gerwig use real estate to structure the episodic ramblings of Frances as she apartment-hops from Brooklyn to Sacramento to Paris, Poughkeepsie, and Washington Heights – although she’s really more of a scamperer than a rambler, as evidenced every time Frances picks up speed and jetés on the streets of New York. One sprint lovingly lifts from Leos Carax’s delirious tracking-shot trot in 1986‘s Mauvais Sang, same-tuned to Bowie’s “Modern Love,” and there’s an obvious and joyful French fixation here, with music cues plucked from The 400 Blows and Contempt, among others (it’s wall-to-wall Georges Delerue, to the happy sigh of Francophiles everywhere), and a matte-gray palette piped in from the French New Wave. (The film is shot by Sam Levy and dedicated to the late cinematographer Harris Savides, who lensed Baumbach’s last two films, Greenberg and Margot at the Wedding.)

Even Frances’ last name – Halliday – puts one in mind of a Frenchie, the velvet-crooner Johnny Hallyday, especially when you start thinking about one of his hits, “J’ai Oublié de Vivre.” In a way, Frances has forgotten how to live without Sophie. (When Frances tries to usher Sophie away from her boyfriend toward girl talk in the bathroom, Sophie puzzles, “Are we still doing that?”) Their physical separation charts the same course as a romantic breakup, from hopeful we’ll-still-be-friends vows to a burned-bridges drunken break to a tentative glasnost; there’s even a the-way-we-were relapse before Frances, quite literally, discovers she has her own two feet to stand on.

Frances Ha takes its primary female friendship seriously, and it takes a generous view on the endless 20s, too. Funny and touching, Frances Ha may very well be the most eloquent take yet on a generation in flux – a cinematic talk-back to so many Atlantic articles, minus the scolding and the statistics, and uncharacteristically (for Baumbach) uncynical. Sometimes the older viewer wants to knock Frances about and strongly encourage her to get a job with benefits or acknowledge she’s not always the most interesting person in the room, and the film subtly signals that there will be a time – maybe sooner than she thinks – when Frances’ haplessness will no longer be oopsy-daisy endearing but an embarrassment. But Frances is quick to find magic in her life, and it’s infectious. There’s no small amount of magic in this winning movie about a woman who hasn’t lost her way – she’s only taken the long way to get there.