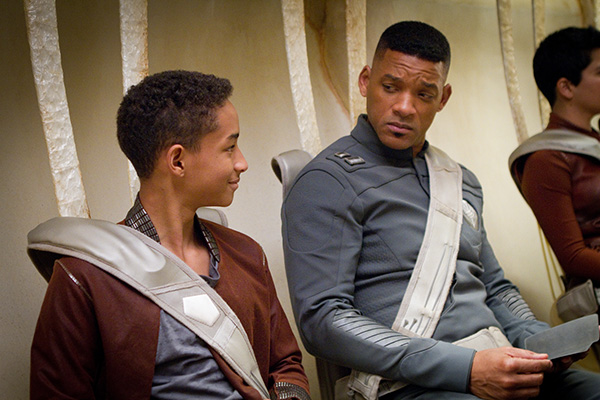 A millennium after humans have been forced to abandon Earth, the planet has reverted to a wild, malevolent landscape filled with mutated creatures and inhospitable dangers. Legendary United Ranger Corps hero Cypher Raige (Will Smith) is traveling with his son Kitai Raige (Jaden Smith), who is still a cadet because he hasn’t performed well enough to make the Rangers. They and the crew are on a routine space run when they hit an intense, unexpected asteroid storm, which destroys the ship and causes it to crash into a nearby planet. It turns out to be inhospitable Earth. Only the two Raiges survive the crash landing.

Cypher’s legs are damaged, so he stays behind and sends his son in pursuit of a rescue flare that remains with the other half of the damaged ship, 100 kilometers away. Kitai must battle the elements and the creatures of the wild, but also must find a route to succeed in his mission. It is a voyage of rescue but also a journey of personal discovery, facing his past in order to find out what he is made of.

After Earth is an ambitious man-against-nature epic, although keep in mind that in science-fiction nature is always made-up construct and not real. This results in a sense of the deck being stacked and a diminishment of the heroics. The film is repetitive and not as suspenseful at it tries to be. Often gorgeous, sometimes fascinating, it is ultimately unwieldy and unsurprising. It fails as a Smith-family project. Jaden Smith, who was fine in The Karate Kid, is flat here. He doesn’t bring any more force to the role than a persistence of action and a constant undercurrent of brooding. Given the talent involved, one hoped for so much more.