An imaginative 3-D animated fantasy begins with Mary Katherine (Seyfried), a young teenager, arriving to visit her eccentric, almost-mad scientist father (Sudeikis) in his house in the woods. Claiming there are elaborate, fantastic, hidden kingdoms deep in the forest that he has been pursuing for years, he comes across as a bit daft. Except he’s actually on to something, which becomes more than apparent when MK (as she calls herself) is shrunk down to the size of the forest creatures. She discovers both that her father is not mad and that there is a magnificent forest world.

In the forest is an ongoing war between good and evil, between growth and decay. In a near medieval setting, two armies are arrayed against each other. The plot is both obvious and innovative. The film works so well because of a dozen small touches, a wide variety of interesting characters, and any numbers of bits of business.

Lately there have been a number of these films but few work as well as this one. In terms of similarly themed movies I have great affection for, this one evokes FernGully: The Last Rainforest. (Going into detail on this plot is to give too much away.) Great voice work, stunning visuals, and a witty, full script make this entertaining for all ages. A complex world with two contrasting societies is created as a detailed, evocative construct. Fast-moving, involving, and entertaining, the tale sweeps you deep into its current and carries you swiftly along. 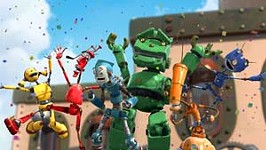 Robots
There are no great animation advance in Robots, but neither is it a return to The Ice Age.