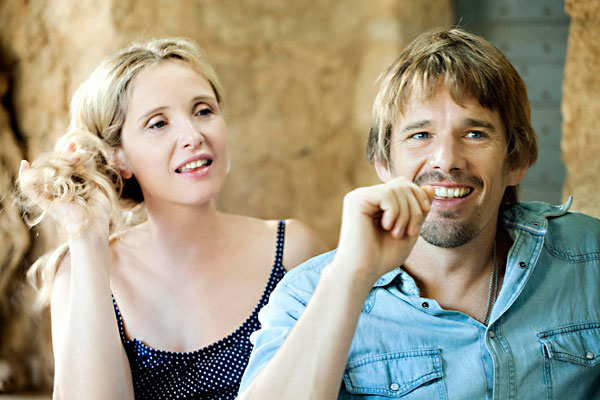 The romantic optimism of people in their 20s, the regrets that begin to encroach in one’s 30s: These are part of life’s natural ebb and flow, and they’re captured with exquisite detail and notable flourish in Richard Linklater’s Before Sunrise (1995) and Before Sunset (2004). These two films, made nine years apart, are touchstones of modern romantic cinema, and their intercontinental lovers, Celine (Delpy) and Jesse (Hawke), are inescapably lodged within the hearts of all who have spent time in their company. They meet on a train in the first film and vow to reunite in six months. But in one’s 20s, time can seem boundless and assignations limitless, and Celine and Jesse’s night before sunrise slips into the past. Nine years later, Jesse, now a successful American novelist, visits France on a book tour, and Parisian Celine enables another long walk-and-talk, which leads back to her apartment and a reckoning before sunset. Jesse is now a father and unhappily married, Celine is still unsettled in her life and career. Can the loose ends of their 30s find romantic closure?

Well, yes and no. I’m not spoiling much by telling you that Before Midnight picks up the pair nine years further down love’s road. Celine and Jesse are an established couple, though not married, and are the parents of twin girls. Now in their early 40s and on summer vacation in Greece, their love is still palpable but so is the passage of time and the weight of life’s constant demands. They still playfully tease and taunt each other, and their sexual desire remains strong, yet each reads so very much into every spoken line and sideways glance. Love may not always be enough when slammed up against the exigencies of careers and parenting and deeply habituated responses. In the blink of an eye, joyous lovemaking can turn into bitter recriminations and leave both combatants and viewers not only wondering where the once-demonstrative love has suddenly gone but how it’s possible for so much roiling acrimony to lie dormant.

Celine really comes into her own in Before Midnight in a way that seems more profound than in the previous two films. She is more provocateur than paramour, more an agent of her own destiny than pouty French beauty. The character has matured over the years and grown in self-confidence, no doubt in ways that parallel the life of Delpy, who, with Hawke and Linklater, wrote the screenplays for the last two films. (The characters in the first film were conceived and written into life by Linklater and Kim Krizan.) Hawke and Delpy’s intimacy with these characters allows the actors to portray them with a naturalism that practically belies the presence of a screenplay. But make no mistake: There is, indeed, a script and a filming strategy. One early sequence is a single, breathtaking, 14-minute take in which Jesse and Celine talk while driving with their girls sleeping in the back of the car. Another, during which their fight erupts in a hotel room, goes on at great length, although Celine and Jesse’s verbal argument is broken up by edits in which words volley back and forth like boxers trading blows. And all the while, the ongoing attention to temporal matters – which has been the overriding hallmark of Linklater’s career – never lets up.

Before Midnight surpasses the two previous films in this trilogy in terms of its intelligence, narrative design, and vivacity. It’s a grand accomplishment, and I feel greedy about wanting to see this film series continue. Romance is wasted and too often thrown away by the young. But as this film shows, romance can ripen with time. Once the swooning years are over and middle age and beyond set in, the real intricacies and beauty of the romantic pas de deux are finally revealed. 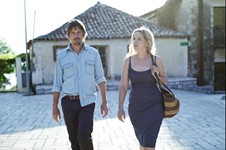 Before 'Before Midnight'
Thoughts from the line outside the Paramount