J.J. Abrams doesn’t seem to have the itch to start from scratch. He rebooted Star Trek in 2009 with a narrative loophole that gave him free rein, and yet he still seems hesitant to test just how much rope he has. A franchise all his to play with, and all he wants is to run a familiar plot through a funhouse mirror? The galaxy at his fingertips, and he imagines a far-flung planet populated with ... Japanese cherry blossom trees? (They’re lovely, very nearly fragrant in 3-D.) Abrams’ space isn’t the final frontier: The landscape reads more like, “Haven’t we been here before?” Well, yes, but a whirligig doesn’t go anywhere, either, and it’s still fun to watch it spin.

Star Trek Into Darkness’ sprightly cold open reestablishes the Enterprise family dynamic: Kirk (Pine) is the incautious captain with a rascally smile, devoted to his crew and total crap at following orders (even his own orders); cerebral Spock (Quinto) is all logic, to the ire of his girlfriend, Lieutenant Uhura (Saldana); medic Bones (Urban) corners the market on exasperation; and so on. All of the reboot’s recastings are terrific, even if a few of the actors, like Anton Yelchin (as Chekhov), have little to do but master the tics of their predecessors.

There’s new blood, too. Kirk gets a kicky blond science officer, played by Alice Eve, to spar with; RoboCop (er, Peter Weller, still minus a human heart) comes on as a growly admiral; and the magnificently monikered Benedict Cumberbatch plays a Starfleet officer gone rogue for intriguing reasons I won’t divulge here. Cumberbatch is the star of BBC’s Sherlock and an object of intense fascination, with his face and affect a shoo-in for prom king of Area 51. (While he is demonstrably homo sapien, you’d be forgiven for suspecting a more exotic taxonomic rank.) Abrams was smart to cast an honest-to-god thespian as his morally complicated villain, but who knew he’d be such aces at hand-to-hand combat, too?

Screenwriters Roberto Orci, Alex Kurtzman, and fanboys’ favorite whipping boy, Damon Lindelof, keep the film moving at a quippy clip; there’s really no fat here until the film feints a climax only to lurch the coaster-car back up the hill again. The tentpoles are famous for tacking 20 minutes too long onto their summer cine-spectacles, and Abrams’ is no different. He just does it better. 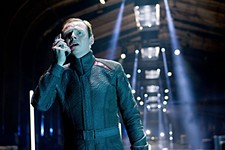