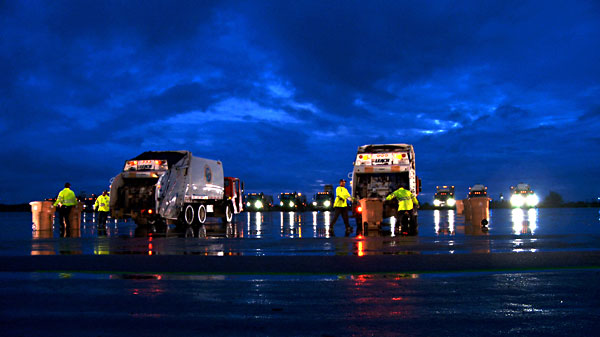 Although it’s true that one man’s trash may be another man’s treasure, it takes Austin-based choreographer Allison Orr to demonstrate that one city’s trash collection can provide the foundation for an amazing work of art. Initially, the beauty and grace of the garbage trucks and the routine motions of the sanitation workers were but a twinkle in the mind’s eye of this choreographer. Orr envisioned a dance piece, performed by the workers and their machines, a celebration of the interplay between humans and machines, and the rhythms, movements, physicality, and precision teamwork that go largely unnoticed. To realize her project, Orr first had to convince the pertinent city of Austin management to allow her to join garbage collectors in ride-alongs and to sanction some rehearsal time. Even harder was the task of convincing the initially disinterested waste management employees that their daily routines are the stuff of art and beauty.

For more than half a year, Orr showed up predawn for her ride-alongs and pep talks. So did filmmaker Andrew Garrison, an acclaimed documentarian and associate professor of filmmaking at UT, who was intrigued by Orr’s ideas. Decidedly less intrigued by the imaginings of this slender, white choreographer were the mostly black and mostly male sanitation workers. Garrison’s film shows how Orr’s enthusiasm and dedication gradually wore down the reluctance. This group process forms the heart of Trash Dance, showing Orr’s creative fever as her understanding of the job deepens and the workers begin to lose their inhibitions about performing and their preconceived notions about art. If dance, as Orr explains, is simply the coordination of space, time, and energy, then the orchestration of garbage trucks, trash receptacles, and the human beings who maneuver them is the dance equivalent of a city symphony.

In films by the likes of Michael Bay, Paul Verhoeven, and Guillermo del Toro, machines are shown to be the nightmarish enemies of human beings, so it’s refreshing to find the machines in Trash Dance working in harmony with their human operators. Only about 15 minutes toward the end of this brief film showcase the actual Trash Dance show, which was performed live only once before an audience in 2009 – and on a rain-slicked night, too. The collaborative process of creating the performance is the crux of Garrison’s film. In addition to being fascinating to observe the process over time, Garrison’s focus is a smart move since his midrange camerawork doesn’t fully capture the magnitude and magnificence of the show, which was also accompanied by a soundtrack composed by ubiquitous Austin musician Graham Reynolds. A winner of numerous festival awards, Trash Dance is now ready for its bow on the national stage. 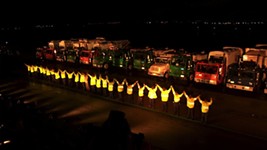 The Wilgus Stories
Based on stories from Gurney Norman's book, Kinfolks, this touching rural road triptych visits three crossroads in the life of Wilgus Collier (Johnson), a young ...