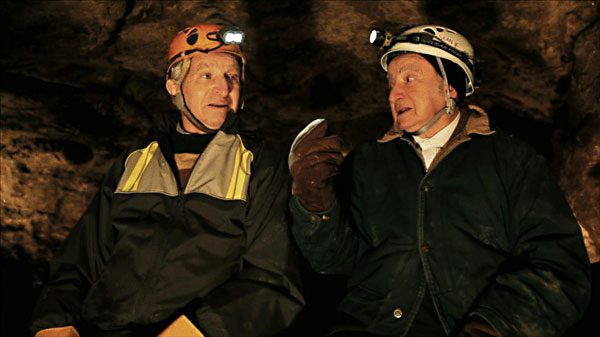 No Place on Earth

Made in conjunction with the History Channel’s theatrical documentary production wing, History Films (also behind Werner Herzog’s Cave of Forgotten Dreams), No Place on Earth recounts an astonishing tale of discovery and survival. In 1993, Chris Nicola, a caving enthusiast from New York, was spelunking in Western Ukraine’s gypsum caves when he unearthed evidence of modern human habitation, including medicine bottles, buttons, and a woman’s shoe. He found no records to explain the presence of the artifacts, so he embarked on an amateur archaeology project spanning two decades, plotting the locations of the objects on maps and returning each year to investigate the mystery of their origin. Clues from reticent locals led him to suspect that the items might have belonged to Ukrainian Jews seeking refuge during the Holocaust. In 2002, Nicola received an email from Sam Stermer, one of the survivors, confirming his theory.

Between 1942 and 1944, two extended families, the Stermers and the Dodyks, spent 511 days hiding from the Gestapo in underground caves, with no reliable source of food, water, or supplies. Actively pursued not only by the Germans, but also by the Ukrainian police and the local peasants (who would be rewarded for reporting their whereabouts), the families wended their way deeper and deeper into the caverns. The suitability of this hiding place was no secret in the nearby town, and the asylum-seekers were raided on more than one occasion. Several family members were captured and killed; others escaped and descended into lesser-known caves, where entrances were so narrow that adults couldn’t fit through without assistance.

The film’s narrative unfolds through interviews with Nicola and four of the survivors: Sam and his brother Saul, and sisters Sonia and Sima Dodyk, who describe how they made food, procured firewood, dug out alternate exits, and otherwise scraped by as the front line crossed over their heads. Finally, in April 1944, they were liberated. Nicola’s statistics confirm that the Stermers and Dodyks still hold the world record for uninterrupted survival in a cave.

In addition to the interviews are excerpts delivered in voiceover from the self-published memoir by family matriarch Esther Stermer. Here begins the slippery slope of unfortunate hallmarks of the History Channel style – familiar stock footage, a dearth of contextual information, and, most problematic, the use of dramatic reenactments. The reenactments are stagy and redundant. Replete with shaky-cam cinematography, violin-scored montages, and a huge cast of actors, this illustrative effort actually detracts from the story, raising the question of whether a documentary is the correct medium for portraying this material at all. Would a radio piece work better? A photo essay? Certainly, the present-day footage of the caves is invaluable, but the docudrama elements cast a damning patina of fakery on everything: When we see landscapes, are we looking at the actual landscape of the place where the events took place, or is this a more picturesque location chosen for dramatic effect? (The credits list filming locations in Slovakia and Hungary as well as Ukraine.) The major departure from the cable outlet’s format is the absence of commentary from academic experts, which would have been helpful for sorting out the fuzzy facts and chronology. As affable a guy and avid a caver as Chris Nicola may be, he’s no historian. None of my formal quibbles is meant to make light of this heroic story. Indeed, some chronicle is better than no chronicle, but the past exists only in the retelling; how history is written is as important as the story itself. Don’t these survivors deserve better?