Does two make a trend or do we wait for three to call it? The Spanish film Blancanieves follows French production The Artist as another modern silent mostly skipping talk to tell a story. (Occasional title cards fill in the blanks.) You could call it a canny move to woo American audiences too lazy to read subtitles, but unlike The Artist's old-glamour Hollywood setting, Blancanieves doesn't shy from its foreign yet archetypal origins, fusing a period piece about two generations of matadors with the Grimm Brothers' Snow White fairy tale. Blancanieves was honored as the opening night film during last month's Cine Las Americas Film Festival.

Antonio Villalta (Cacho) is a celebrated matador in 1930s Seville. The lack of dialogue heightens the drama and detail of Villalta’s rituals, from his prebout prayer and his arena showmanship to a tossed hat that drops ominously to the dirt. The bout ends in disaster, resulting in his newborn Carmencita growing up estranged from her father and under the boot heel of his malevolent second wife, Encarna (played by Verdú with the deliciously brittle swish of Gloria Swanson). Carmencita eventually grows into Carmen (García, like an Andalusian Greta Gerwig), who is strong-bodied and good-hearted but, in keeping with the Snow White framework, not exactly the apple of her stepmother’s eye.

Blancanieves holds to the structure, but not strictures, of the source fairy tale. In truth, the film could be tightened: It takes two-thirds of the movie just to get to Carmen’s flight from home and to a new family of matador dwarves. Blancanieves never lags, per se, it’s just awfully in love with itself: with its gorgeous black and white chiaroscuros and whirling-dervish first-person camera perspectives, the Spanish-guitar-scored dance sequences (that include the undeniable dance of the matador in action), and battering winds of emotional extremes. By the end of this sumptuous and sincerely felt melodrama, I was rather in love with it, too. 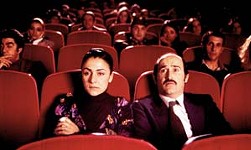