Meticulous and abstruse, Shane Carruth’s Upstream Color is an idiosyncratic film that invites explication but defies total understanding. It is Carruth’s sophomore film and has been eagerly anticipated ever since his filmmaking debut in 2004 with Primer, a microbudgeted film about time travel in the Dallas suburbs that received a Grand Jury prize at Sundance and amassed a cult reputation despite appearing on very few screens. Deciphering Primer now seems like child’s play in comparison to Upstream Color, even as the newer film is marked by its more precise imagery, camerawork, and narrative ambitions. Yet Upstream Color lures us in like fish attracted to worms on a hook, and soon we’re trapped within its hermetic universe.

The worm metaphor is apt for this film, in which these wrigglers play a significant narrative role. Exactly what kind of worms these are, and what they actually do in the film is beyond my full comprehension, but they fit somewhere within Carruth’s orchid-pig-human continuum that governs his fractured story. Upstream Color is elliptically told and makes generous use of jump cuts, thus much of what we take away from the film may be inferred rather than the direct consequence of a specific image or action. Dialogue, too, is kept to a minimum, and much of what is spoken could be termed non sequiturs. I am far from convinced that, in the final analysis, Carruth has anything terribly insightful, cohesive, or significant to impart, but he sure has mastered the art of mesmerizing presentation. This is arthouse science fiction at its most compelling yet cryptic.

I’m not going to try to summarize the plot in this space. Viewers may spend the first hour of the film scratching their heads as we see characters fleeced of their savings and careers from the forced ingestion of the powder made from the wormy things found in blue orchid dirt. There’s a character named Thief (Martins) and another called the Sampler (Sensenig), who herds pigs in a place called Quinoa Valley, in between recording ambient natural sounds and reversing the trancelike effects of the worm compound through some kind of human to pig transfusion. Then there’s Kris (Seimetz), the film’s central character into whom viewers can pour their hopes and fears. A victim of the Thief and the worm compound, she finds another victimized soul, Jeff (played by the director), and together they achieve a jagged harmony. And, Thoreau’s Walden is also a major plot element.

Credit must be given to the film’s star, Amy Seimetz (who is also a filmmaker), for creating an actual character from all this, one for whom we can feel and care about. In addition to playing Jeff and directing Upstream Color, Shane Carruth also produced, shot, co-edited (with Ain’t Them Bodies Saints’s David Lowery), composed the unearthly electronic score, and is also self-distributing the film. There’s no question this is the work of an auteur, even if Carruth’s overall aesthetic is greater than the sum of his noodlings about parasites and nature. Upstream Color still manages to bloom.

See "Swimming Upstream," p. 47, for an interview with the director.

Swimming 'Upstream'
Shane Carruth on pigs, money, and being a control freak 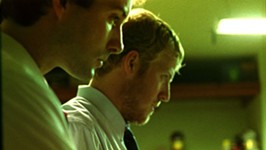 Primer
Physics and metaphysics mingle in this minimalist yet intriguing fiction about inventor-scientists who discover a technique of time travel.