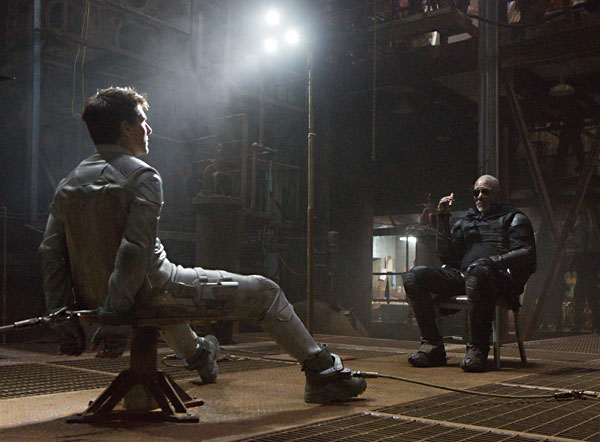 Jack (Cruise) and Victoria (Riseborough) are a couple who help maintain giant machines that suck out vital resources from the oceans and what’s left of a future, devastated Earth. Decades ago, the alien Scavs destroyed Earth’s moon and then invaded the planet, although they lost the brutal war that devastated Earth. All that remains are ruins, vast deserts, some oceans, and radiation zones. Most of the population has fled to a spaceship orbiting the Earth, but the handful of people who remain help maintain the massive ocean-mining operations while fighting the renegade Scavs that survived the war. Jack is a security repairman who cruises the planet servicing the drones that guard the planet and fixing the mining equipment, while Victoria mans the command center in their sumptuous home.

Visually, the film is stunning, but Tron: Legacy director Kosinski is satisfied with extreme style over content, looks over meaning. That doesn’t mean that much of the audience won’t find this engaging and entertaining. He is a hell of a director, even if the result provides more surface than depth: Creating moods and depicting action, however, are two areas in which he excels.

There are a number of underlying mysteries in the plot, which twists and curves. The score is a dead-ahead rumble that carries the viewer deep into the film, which is never exactly what it seems. Still, the acting leaves a bit to be desired. Cruise phones in his performance and Kurylenko, whose work in To the Wonder is so rich and evocative, is all surface here. The standout is Riseborough as Jack’s lover and team partner.

The film is a voyage forward in which it turns out that nothing is what it seems. Admirable in its look and style, the film is not unique or exceptional. Nevertheless, given the state of current science-fiction fare, the film does hold its own. 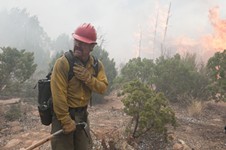