Writer/director and University of Texas graduate Todd Berger opens his second film, the black comedy It’s a Disaster, with a close-up of a 1945 photograph taken on the beach at Bikini Atoll. Over the opening credits – and accompanied by Tchaikovsky’s 1812 Overture with one assumes careful consideration, considering its Fourth of July, rah-rah America associations – the camera pulls back in tick-tocks to reveal the tell-tale mushroom cloud of a nuclear test. What follows is a reversal of sorts: Berger’s film boasts a big concept – dirty bombs of unknown origin have detonated in multiple American cities circa now – but cinches its focus to eight people in a trapped space. With admirable gallows humor, It’s a Disaster wonders what it would be like for a couples brunch – a spot of social discomfort served up with finger foods, ritualized enough to have its own name – to radically uptick from a few hours of forced chitchat into one’s maybe-final resting place.

It’s a Disaster makes David Cross’ new-to-the-group Glen the audience’s proxy. On only his third date with the group’s lone singleton Tracy (Stiles), Glen is the nice-guy outsider, scrambling to keep straight who’s who among the bickering, tense-shouldered hosts (Hayes and Miller), the free spirits making sexual innuendo over Sunday quiche (Boston and Brennan, another UT alum), and the forever-engaged, not-anywhere-near-to-getting-married couple (Ferrera – more, please! – and Grace). Audiences enamored of the reliably comic Cross’ turn as Arrested Development’s never-nude Tobias Fünke or of his antics on the still-beloved HBO sketch comedy Mr. Show may double-take at the sight of Cross playing a straight man, but he’s quietly moving as a generous spirit waiting out the end of the world with squabbling, wildly self-absorbed strangers. If there’s a quibble to be made here, it’s with how Glen gets thrown under the bus, in an amusing subplot that nonetheless is indicative of the primacy of the punchline in Berger’s playbook, to the occasional detriment of character connection. There’s enough, again, careful consideration embedded in the music cues – from classical familiars to thematically resonant contemporaries (as in a well-placed Baths song), to suggest Berger absolutely knows what he’s doing when he’s doing it – that it steepens the drop-off when the film misses its mark.

With the local release taking place the same week as the Boston Marathon bombing, the timing, yes, couldn’t be worse, and audiences may not be particularly keen on a film that is in many ways flip about terror, even as it has worthy and perceptive things to say about the aftermath of an attack: about the technological comforts that drop away, rendering us helpless; about the grudges that survivors will forgive, and the ones they hold fast to (Berger has a funny cameo as a hazmat-suited neighbor who is stung to discover, end-times be damned, that he was boxed out of couples brunch for being a divorcé); and about the steadfastness of the so-called essential self. That may be giving too much weight to a banter-heavy picture largely untroubled by its doomsday scenario – the possibility of imminent death is but the situation to this situation comedy – but Berger’s low-key, likable ensemble film flares with brilliance in its framing concept. Without giving too much away, the final cutaway had me audibly say ha!, then nod my head excitedly at the resulting a-ha!. Berger’s one to watch.

READ MORE
More It's a Disaster 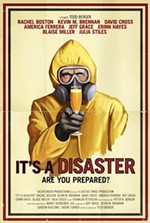 AFF2012: Case Study: 'It’s a Disaster'
Todd Berger says some - but not too much! – about his doomsday rom-com 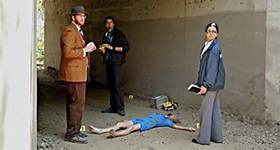 The Scenesters
Movies and crime fit together like film and noir. In this comic murder-mystery, the talents of the Vacationeers come together to produce the visual comedy ...