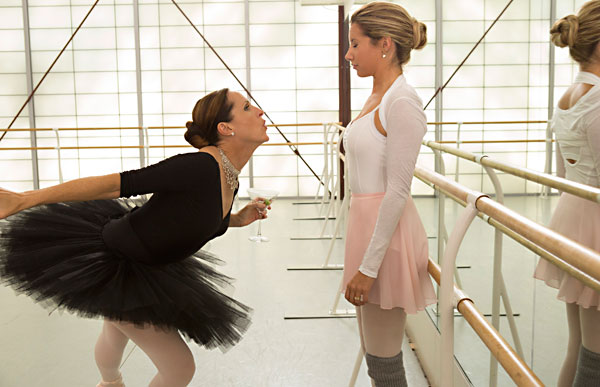 By the time a vengeful maid serves up a “poop pie” swarming with CGI flies in Scary Movie 5, there’s no mistaking that this franchise has delivered just desserts. Headlined by Lohan and Sheen, this parodic auto-mash-up of Paranormal Activity, Black Swan, Mama, and The Evil Dead remake (playing concurrently in theatres), SM5 is the latest (and hopefully last) installment of a series originally conceived as a spoof of Scream, (which was itself a spoof of slasher flicks in general). It’s supposed to be horrible, and therefore it succeeds on its own shitty terms, manifesting a malodorous integrity through jokes about tubas, waterboarding, and Honey Boo Boo. Glancing back at my notes, I see the scribbled phrase “toothbrush in the butt” – not once, but twice.

David Zucker, the director of Airplane!, The Naked Gun, and An American Carol, co-wrote the film along with Police Academy scribe Pat Proft. That both men are over 65 may explain the recurring allusions to The Benny Hill Show and its theme song, Boots Randolph’s “Yakety Sax.” One may detect a whiff of Zucker’s noted Hollywood Republicanism in SM5’s racially based “humor.” White scientist Don (Rex) angers his African-American boss (Crews) by inadvertently comparing him to an ape. Meanwhile, Don’s wife (Tisdale) worries aloud that firing her live-in housekeeper (Porto) – depicted as a flatulent, mustachioed, piñata-swatting, Santeria-practicing fatso, que no habla inglés – will result in a charge of “discrimination.” That director Malcolm D. Lee is African-American does not excuse the situation, and may actually make it more disheartening.

SM5 tanked opening weekend, which may toll the knell for this property. My own experience earlier this week at a Cinemark “XD” theatre, which had easily 800 seats, bears this out. Fewer than 10 people were there. As the trailers for Kick-Ass 2 and The Hangover 3 rolled like a deranged Sesame Street counting lesson, I expected more people to trickle in. Instead, two walked out. I found myself imagining the red-carpet premiere of SM5. Actual adults had to dress up, sit through it, and clap at the end. They had to wait, too: According to the gossip blogs, the film was delayed 30 minutes due to the late arrival of Lohan. Her tweeted excuse was that she’d been waylaid at the dentist. Considering the flagrant abuse of toothbrushes here, who can blame her?