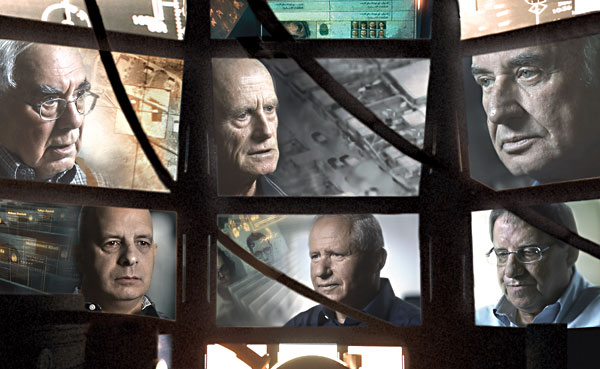 The rule of surveillance is to keep quiet and let others do the talking. The Oscar-nominated documentary The Gatekeepers flips the script, to astonishing effect, giving voice to the retired directors of Shin Bet, Israel’s domestic intelligence agency.

“When you retire, you become a bit of a leftist,” confides Yaakov Peri, who ran the organization from 1988 to 1995. That admission goes a long way in explaining why these former agency men are willing to reflect publicly and critically on their roles in the ongoing Israeli-Palestinian conflict. Peri is one of six Shin Bet directors to sit for the camera; another is Avraham Shalom, whose red suspenders and grandfatherly comb-over affect something soothing – until he recounts, stone-faced, how he gave the kill order for two terrorist suspects detained for hijacking a bus in 1984. The film dramatizes that event and others by using archival photos as a jumping-off point for a kind of digitally crafted flip book (created by the French digital effects studio Mac Guff), in a technique so unobtrusive and movielike, it’s easy to forget one is looking at manipulated imagery.

The men, interviewed separately, are candid about their triumphs and failures. There’s seemingly a genuine soul-searching here, and one takes away the general impression that most of them believe, in the aftermath of Prime Minister Yitzhak Rabin’s 1995 assassination by a radical right-wing Israeli national, that subsequent governments have bungled peace efforts. Individual biographies are limited – you’ll glean more from reading their profiles on the film’s website – but as a compact overview of the Shin Bet perspective on decades of domestic and international turmoil, The Gatekeepers is an elucidating and provocative work. (The other four intelligence directors interviewed are Ami Ayalon, Avi Dichter, Yuval Diskin, and Carmi Gillon.)

Filmmaker Dror Moreh never appears on camera, but certainly his presence is felt as an offscreen interviewer; he needles the Shin Bet vets with real urgency in his voice. Editor Oron Adar’s abrupt cuts – which inch us closer to the interviewees, and refuse the contemplative buffer space common to talking-head docs – crucially contribute to an agitated feel that serves the subject well. Palestinians and Israelis, after all, have been living anxiously for decades; for 96 minutes, at the very least, the viewer can stand to feel powerfully unsettled.