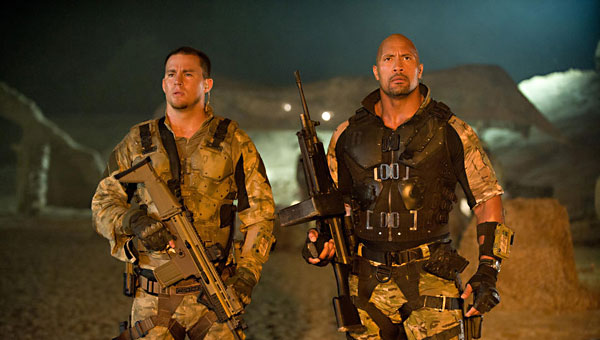 G.I. Joe began life as a very popular toy line, but in no way was it surprising that a successful comic book series followed. In 2009, this led to a feature film, although this new film can be regarded as a sequel in only the most typical and superficial Hollywood ways. Mostly this is because there really is nothing there.

G.I. Joe: Retaliation knows no boundaries and is instead an overflowing action stew loaded to the brim with half-formed ideas, action stereotypes, and hints of characters. There is no idea too absurd and no martial activity too bizarre to not be included. Loud, violent, swift, and excessive, the film is a comic book adventure in which even the barest plot and most minimal characters are distilled out. Chaotic, it is overloaded with everything from a monastery in the mountains to racing boats, sword fights by combatants who climb mountains and race along zip lines to tanks running amok – every kind of gun imaginable is fired, and there's deadly hand-to-hand combat, too.

The G.I. Joes pull off a successful mission extracting atomic weapons from Pakistan. As they wait at the rendezvous to be picked up, they don’t realize the enemy has struck on the home front. The president (Pryce) has been replaced by a body double, and agents of the evil Cobra are running the country. Instead of aircraft to take them home, the G.I. Joes are slaughtered by fire from above. Only three are left: Roadblock (Johnson), Flint (Cotrona), and Lady Jaye (Palicki). They must avenge their fallen comrades. Thus the film’s subtitle: Retaliation.

There actually is some clever dialogue in the film, especially early on between Roadblock and Duke (Tatum). But this fades over the course of the film, and too much of what the characters say sounds as though it’s been lifted verbatim from 1930s and 1940s serials. As to be expected, Johnson actually imbues his character with some humanity, but in the cacophony that is this movie, this doesn’t really amount to much. Some will point out that this profusion of light, action, violence, and noise is exactly what they want from a movie like this. And that’s exactly what they’ll get.