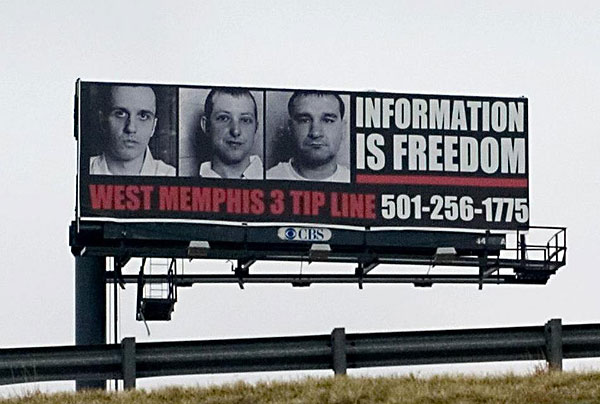 In 1993, three 8-year-old boys – Stevie Branch, Michael Moore, and Christopher Byers – were murdered in West Memphis, Ark. Police arrested three teenagers – Damien Echols, Jason Baldwin, and Jessie Lloyd Misskelley Jr. – and charged them with capital murder based on the theory that Echols, a known reader of Stephen King novels and wearer of black T-shirts, was the ringleader of a homicidal satanic cult, and that Baldwin and Misskelley were his followers. The “West Memphis Three,” all from (in Echols’ words) “bottom of the barrel, poor white trash” families, pled innocent, and relied on state-appointed attorneys for their defense – attorneys who happened to be hunting buddies with presiding Judge David Burnett. Providing testimony from “experts” with mail-order diplomas and no direct evidence, the prosecution scared jurors witless with photos of the victims’ mutilated bodies and obtained first-degree convictions in all three cases. Baldwin and Misskelley were sentenced to life in prison, and Echols received the death penalty.

Amy Berg’s West of Memphis is the fourth documentary about the “WM3” case, after Joe Berlinger and Bruce Sinofsky’s Academy Award-nominated Paradise Lost trilogy (1996-2011) for HBO. Berlinger and Sinofsky’s films dismantled the prosecution, launched a grassroots advocacy campaign calling for the release of the WM3 (attracting such star supporters as Henry Rollins, Patti Smith, and Johnny Depp), and tracked the progress of the appeal effort – and eventual release – of the defendants. Berg’s production schedule overlapped with Academy Award-nominated third entry in the series, Purgatory (2011); however, West of Memphis is no latecomer’s survey from the sidelines: It was produced by Echols and his defense team, from the perspective of death row.

The story of how this documentary came to be is almost as complex as the case itself. In short, The Lord of The Rings filmmakers Peter Jackson and Fran Walsh got involved after watching Paradise Lost on DVD in 2005. They reached out to Echols’ wife, Lorri Davis, who was overseeing the defense, and offered to anonymously pay for DNA tests and hire qualified expert pathologists. This led to the discovery of new forensic and DNA evidence that cast overwhelming doubt on the original autopsy report, the supposed murder weapon, and the attested satanic motive. When Judge Burnett denied their appeal based on this evidence, Walsh and Davis enlisted Berg’s filmmaking assistance to get this miscarriage of justice on record.

West of Memphis is on a straightforward mission to embarrass three parties: first, Judge Burnett, whose obstinance is portrayed as a political maneuver; second, the filmmakers’ own suspect, Terry Hobbs, one of the victims’ stepfathers (who rather bizarrely came on the scene after suing the Dixie Chicks’ Natalie Maines for defamation); and third, the state of Arkansas, depicted here as both backward and craven, allowing the WM3 to go free in exchange for an Alford plea that absolved the government of any legal responsibility for its actions. Three years ago, Arkansas was blithely ready to execute an innocent man rather than acknowledge a mistake. Today, it allows the real murderer to remain at large.

While justice still hasn’t been served, Berg’s film bears witness to 18 years of wrongful imprisonment. It is a fascinating primary document of this landmark case of crowdsourced criminal investigation. As a cautionary tale about convenient scapegoats, media sensationalism, and electioneering, it could scarcely be more relevant in this moment of national furor over gun control. (A tune called "Anything Made of Paper," which Austin songwriter Bill Carter wrote for Damian Echols, is also featured in the movie as well as the musician's new album.) Moving and gruesome, West of Memphis is an eloquent disquisition on the banality of evil.