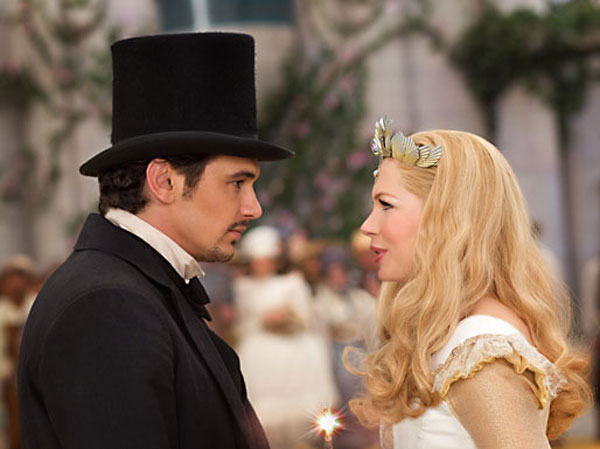 Oz the Great and Powerful

”If you can make them believe, then you’re wizard enough,” says the witch Glinda (Williams) to the magician and con man Oz (Franco), who has been cast reluctantly as the prophesied savior of her people. Can the filmmakers, however, make the audience believe? That is the real question underlying Oz the Great and Powerful, and that question raises another: Is “wizard enough” good enough when you’re tinkering with a beloved movie classic?

The answer is not a resounding yes or no. This Disney prequel to MGM and Warner Bros.’ enduring 1939 masterwork charts its own course, and, for the most part, is the better for it. The film has enough of the familiar and enough of the new to make it a valid origin story about how the wizard arrived in the land of Oz and gained his throne decades before Dorothy and Toto came calling. The story does nothing to besmirch the original film, yet it diverges just enough so that the audience will be intrigued and Warner’s intellectual-content attorneys will remain appeased.

Sam Raimi (1981’s The Evil Dead, and Spider-Man 1, 2, and 3) brings a special visual panache to this 3-D film. Like the original Oz, this film begins in black-and-white and the square Academy ratio before exploding into widescreen color once we get from 1900’s Kansas to Oz. Raimi’s Oz is a land of vivid colors, enormous flowers and foliage with tendrils that reach into the audience, babbling waterfalls, and violent tornadoes. His camera travels voraciously through the strange panoramas and swoops in at odd angles that frame things anew. And if the spires of his Emerald City gleaming in the distance bear a slight resemblance to the Magic Kingdom logo, so be it. Raimi’s imagination gets a thorough workout. Less creativity is discernible in the script department, however. The screenplay by Mitchell Kapner and David Lindsay-Abaire is based on L. Frank Baum’s original novel rather than the earlier film. Even though this movie tells a different story than the 1939 original, Oz the Great and Powerful is burdened with lots of clunky and repetitive dialogue.

The inadequacies of the script make the film seem overly long and hamper the performances. A couple of the actors are on shaky ground to begin with – and I’m talking to you here, James Franco. Franco seems miscast as Oz – there’s more of a smirk than a twinkle in this huckster’s eye. Mila Kunis, too, is undone by some mechanical dialogue that saps the magic from the story. On the other hand, Rachel Weisz and Michelle Williams deliver some of the finest work of their careers, and Zach Braff and Joey King memorably give voice to a couple of new characters created for this film.

Oz the Great and Powerful vacillates between visual wonders and earthbound duds. Is there enough here to make viewers believe? Most probably. Even though the film has no ruby slippers, we all know there’s no place like home.

Drag Me to Hell
Sam Raimi makes a triumphant return to the "splatstick" horror genre he more or less invented with The Evil Dead and its two sequels.