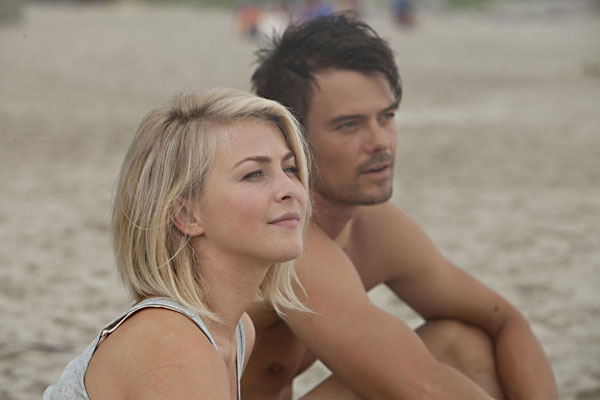 Sometimes a person just wants to take a hot bath and quick-skim a paperback romance. And that’s okay. Novelist Nicholas Sparks has built an empire chunking out exactly that kind of waterlogged romance, and Hollywood has been more than happy to send his bestsellers down the factory line toward multiplexes. Artistry occasionally happens in a Sparks adaptation – 2004’s The Notebook caught lightning with its superior production values, sensitive direction by Nick Cassavetes, and two-cats-in-a-bag breakout performances by Ryan Gosling and Rachel McAdams – but artistry is by no means a requirement for getting audiences into seats. Put another way: Sometimes you just really want to take a damn bath, even as you’re staring down soap scum and limescale. The heart wants what it wants.

That isn’t to say the heart doesn’t long for something far better than this plodding potboiler romance about domestic-abuse survivor Katie (Hough, a Dancing With the Stars alum), who flees to a North Carolina beachside town, takes a new name, and takes up with Alex (Duhamel), a widower and single father. Director Lasse Hallström previously helmed a Nicholas Sparks adaptation with the 2010 sudser Dear John and managed to utterly sap all charisma from Channing Tatum – yep, the same guy who reduced grown women to girly giggle-shrieks when he disrobed in last summer’s Magic Mike. Here, Hallström has no more luck coaxing complexity or vibrancy from Hough and Duhamel: The leads project a sunny patina of wholesomeness and share marvelous tans, but beyond that, it’s a shrugging love match. Adding further frustration is the been-there, seen-that quality that dogs the film. Sure, Sparks is a known for recycling material (cancer and epistolary romance are regular plot hatchings), but Hallström and scripters Leslie Bohem and Dana Stevens really push the limit by poaching the iconic canoe-in-a-rainstorm scene from The Notebook. Perhaps they thought the callback would make audiences feel more affectionate toward this second-rate production. Nice try: The effect is more like splashing around in somebody else's bathwater.