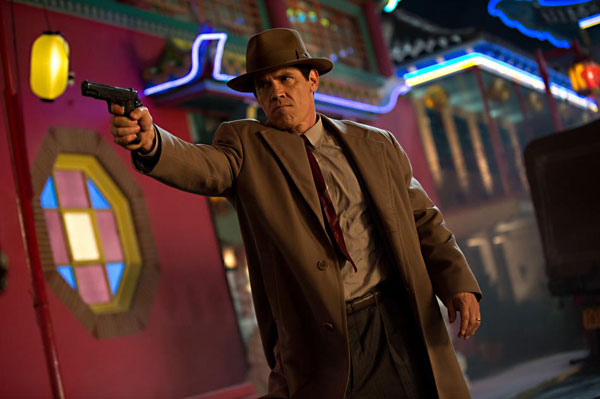 A virtual catalog of uneven filmmaking, which includes the plot and many of the performances, Gangster Squad tells the story of a number of cops who band together to work outside the law. New Los Angeles Police Chief Parker (Nolte) is installed in 1950 to clean up the department and deal with the East Coast mobs that are working to establish bases of operations in L.A. According to this film, the worst of these gangsters is Mickey Cohen (Penn). Unofficially, Sgt. John O’Mara (Brolin) is asked by Parker to create a renegade band of honest cops to go after Cohen and his mob.

Loosely based on historical incidents and characters, the film takes great liberties with them. Mickey Cohen, in particular, is lionized past all historical record with one of his major criminal accomplishments in Las Vegas transferred for the sake of this story to L.A. Much of the historical turf has also been cannibalized in such TV series as The Hat Squad and such films as the confusing Mulholland Falls and L.A. Confidential, to name a few of the creative projects that deal with how a handful of honest cops work outside the corrupt L.A. police system as they try to prevent the East Coast mob from gaining a significant presence in their city.

After more than 100 years of gangster films, it’s become hard to offer an original and unique effort in this genre. What is notable about Gangster Squad is its uncomfortable mingling of brutal and fun elements; it’s like a strange mutant offspring of The Untouchables and a pulp comic-book sensibility. Nonstop, over-the-top violence is set against the classic backdrop of grand hotels, train station lobbies, and Hollywood nightclubs. (Gangster Squad’s original scene of gunplay in Grauman’s Chinese Theatre was excised and restaged following the Aurora movie theatre rampage, which pushed back the film’s release date.)

Penn’s performance is consistently over-the-top and viciously stylized; it sometimes seems right on target and at other times seems jarringly out of place. Brolin’s performance, on the other hand, is consistent throughout – deadly serious and straight-ahead – but even this approach delivers erratic results. The other members of the squad are undeveloped as characters and are used primarily as stereotypes. The best performance in the film is Gosling’s as Sgt. Jerry Wooters: It’s deliberately uneven, and almost always proves to be exactly what is needed. One is not sure for quite a while who Wooters really is – what drives him and what he believes in – which deepens the film and adds some humorous touches and nonviolent personal exchanges. His relationship with Cohen’s girlfriend Grace Faraday (Stone) is largely predictable but includes some unexpected moments and interesting interactions.

Director Ruben Fleischer (Zombieland, 30 Minutes or Less) delivers no cinematic surprises other than his unevenness of tone, style, and narrative development. Despite the unrelenting action and the terrific cast, Gangster Squad comes up more scattered than successful.