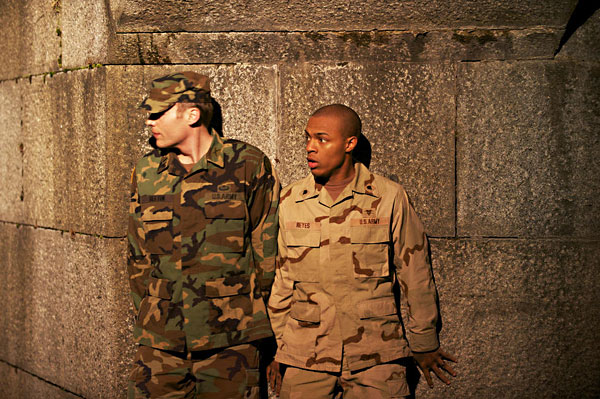 On the eve of his National Guard unit’s deployment to combat in Iraq, Lieutenant Danny Sefton (Seth Gabel), who is well connected because of his family, gets himself transferred to another unit that is not being deployed. When Specialist Chris Reyes’ (Shad “Bow Wow” Moss) request to stay behind in order to be with his dying son is denied, Sefton at first tries to comfort him. Then reluctantly (and somewhat inexplicably, given the transfer he just lobbied for and achieved), Sefton decides to help Reyes go AWOL.

This feature is based on a 2006 short film also written and directed by Michael Connors, an ex-Army Ranger and member of the New York National Guard. One of the overwhelming feelings after watching the film is that it probably should have remained a short. It simply doesn’t have enough material for a feature, so Connors really drags out the story. Although Allegiance touches upon the understaffing of the U.S. Army in the early Nineties, it doesn’t spend enough time exploring the problems that resulted because of it. Needing manpower for our wars, the weekend warriors of the National Guard were deployed to Iraq and Afghanistan, where their tours of duty lasted at least a year and were often situated in combat zones.

The film’s score is a hypnotic pounding that’s designed to accelerate the dramatic tension on the screen, but since there is really little tension the music instead emphasizes the repetitive nature of the action. Visually, the film is flat, with washed-out colors and plenty of shadows and darkness. Even though this look seems intentional, it does little to enhance the dramatic stakes. The cast is consistently excellent but the outstanding acting is in pursuit of a terribly small and predictable goal. The action is so unsurprising that a viewer keeps expecting that some different turn of events will occur because, otherwise, the film’s development would be so painfully obvious. There never is such a turn.

The film is a chase, a long hide-and-seek pursuit aimed at the logical and, seemingly, only goal. At first, the film seems ideologically confused, but ultimately the only big surprise is that it proves not to be conflicted at all. Instead, the film boasts an insistent and unquestioning patriotism. What begins as a drama devolves by the halfway point into an overly long chase film, which only grows more and more boring.