Behold the weepie that has its own actors snotting into their sleeves. I’m casting no stones here: The quality-assurance boast of that monster-hit stage musical Les Misérables (itself based on Victor Hugo’s 1862 juggernaut novel) might as well be “Successfully Wringing Tears Since 1985!” – and I’ll be damned if it hasn’t wrung buckets out of me since I was old enough to buy a cassette tape of the original Broadway cast recording. I mention the immoderate wetness of this film version’s cast only because it serves as a useful barometer for how much hysteria attends director Tom Hooper’s extravagant adaptation. In brief – a lot. And I loved it.

Built like an ox, his bloodshot eyes narrowing to blasted-out pupils, Jackman is commanding as the former convict Jean Valjean, who hides his past as Prisoner 24601 under an alias to become a factory owner devoted to God and the well-keep of his workers. Soon, the closing-in of his onetime jailer, Inspector Javert (Crowe), forces a spiritual crisis and yet another flight from the law. Indeed, the ever-recurring refrain (amid a score that – let’s be honest – hangs on only four or five rock-solid melodies, endlessly noodled on) is that of their cat-and-mouse play, with both men convinced of the righteousness of their paths as they crisscross over decades, and reach their final crossroads at the student-led Paris Uprising of 1832.

When Les Misérables is good, it is very, very good, and when it is bad, it’s usually because Russell Crowe has opened his mouth. Among the held-breath gambits Hooper (The King’s Speech) endeavors is his mix-and-match cast of stage veterans, movie stars, and intriguing in-betweens, like anchor Jackman and lesser-known breakouts Samantha Barks (as the lovelorn Éponine) and Eddie Redmayne (as the revolutionary Marius – and if we’re ranking, Redmayne’s spare, gutting take of “Empty Chairs at Empty Tables” could easily claim best-of-show). But Crowe, whose professional singing career topped out with vanity band 30 Odd Foot of Grunts, is a sorry (and toady) simulacrum for the raging Javert; he sings standout solo “Stars” like it’s a lullaby, the words “I will never rest” coming off not like the mission statement of an obsessed lawman, but rather the peevish sulk of an insomniac. Certified movie star Anne Hathaway fares far better in a justly hyped supporting role as the factory worker turned prostitute Fantine. Her solo “I Dreamed a Dream” is the first significant test case of Hooper’s other big gamble, which was to record his actors performing live, with flat notes and rough edges preserved and not redone in the safe haven of a studio. Though his tendency is to overchoreograph, here Hooper plunks his camera down and holds for an unbroken shot that both brutalizes and fascinates in its all-in bravado: A high note is missed. A line of song dissolves in panicky hiccups. A moist trickle gathers in the nostril. And it is marvelous. I was never not once convinced Hathaway wasn’t performing, but good God – what showmanship.

The “pure singing” approach is problematic only if you’re contemplating the film as a future soundtrack purchase; the raggedness, in fact, proves Les Misérables’ saving grace. Shot to shot, Hooper’s vision careens between lightly grotesque hyperrealism and tinny movie artifice, wherein unplucked brows and oozing open wounds share space, if not sensibility, with digital fakery and histrionic zooms. It is, shall we say, a little pitchy, this seesaw between grit and gloss, and it is those very wobbles in performance, the so-called mistakes of too shrill or too soft, that make Les Misérables human and heartfelt and – ultimately – a potent piece of cinema, most especially for fans of the musical hungering for nearness to the material. If not quite buckets are wrung by movie’s end, then certainly both shirtsleeves are moist from the effort. 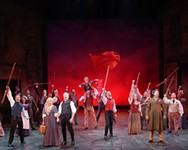