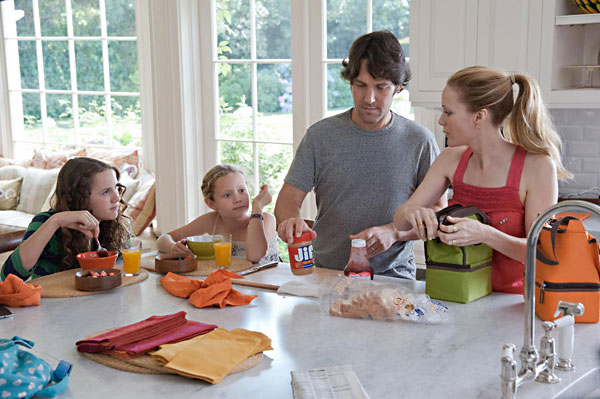 “We have to choose to be happy,” says wife and mom Debbie (Mann), who has whorled herself into an existential tizzy after turning 40. Is happiness a choice? It’s an idea worth exploring, but writer/director Judd Apatow isn’t exactly laserlike in his focus; he’s more like a dog licking the entire kitchen floor clean just to find that one tile smudged with bacon grease. At a baggy 134 minutes, that’s a lot of licking – plenty of time to ponder the film’s manic swings between ambitious and facile, enormously likable and sour to taste.

Debbie and husband Pete (Rudd) – supporting characters from Apatow’s 2007 comedy Knocked Up – are moving reluctantly toward middle age. There’s no going gently into the night for Debbie: “40 can suck my dick!” she howls at film’s beginning. The dirty words are a feint. At its desperate and raw, clogged-artery core, This Is 40 is a powerful evocation of family life as war zone. Debbie and Pete seethe with resentment; sex tends to end in a screechy-pitched bicker; eldest daughter Sadie loathes her little sister Charlotte (they are played by Apatow and Mann’s real-life children Maude and Iris); and Debbie and Pete’s adult fathers (John Lithgow and Albert Brooks) are, respectively, emotionally distant and financially dependent.

I wonder if Apatow meant it all to come off so bleakly? Was he binging on Bergman when he wrote the script? I wonder, too, if he knew how tin-eared this diorama of privilege sometimes sounds? While money woes ostensibly fuel the couple’s troubles, there’s no real sense of danger there. Yes, they might be missing mortgage payments and chronically mismanaging two businesses (she owns a used-clothing store; he runs a specialty record label), but at least there’s the BMW to retire to for a private cry. (There are no repercussions here, just as there is never a legitimate threat of divorce even though Pete and Debbie openly despise each other throughout much of the film.) Another scene has Debbie and Pete ganging up on a single mother (Melissa McCarthy) at their daughters’ school, goading her until she is shuddering with impotent rage at the pretty couple telling lies through their teeth. It’s a deeply funny scene that nonetheless leaves an ugly stain: Does Apatow understand his heroes are assholes?