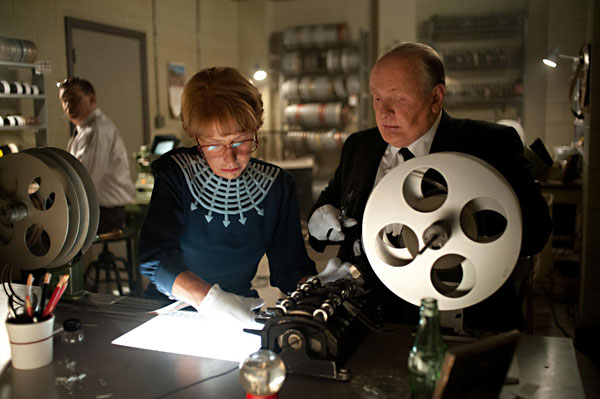 Alfred Hitchcock, the undisputed master of movie suspense, is given fairly fanciful treatment in this movie, which is theoretically based on Stephen Rebello’s book, Alfred Hitchcock and the Making of ‘Psycho’. Yet, as written by John J. McLaughlin (Man of the House) and directed by Sacha Gervasi (Anvil: The Story of Anvil), this film is more a love story about the marriage between Hitchcock (Anthony Hopkins) and his wife, Alma Reville (Helen Mirren), rather than a historically accurate backstage look at the making of this important movie in the Hitchcock filmography and the American psyche.

Portraying Hitchcock, Hopkins dons the prosthetic cushioning that allows him to assume the corpulent shape of the famous director, and the actor’s speech pattern approximates Hitchcock’s distinct vocal style without ever quite nailing his insinuating tone. It’s a good effort, but rarely convinces completely. Easier to concoct is Alma, a figure whose physical bearing is unknown to most viewers. Therefore, it’s barely disconcerting that Mirren looks nothing like the photos of Alma Reville, a talented film editor who worked in the British film industry before marrying Hitchcock and becoming his primary counsel and sounding board. In a less central role, Scarlett Johansson looks nothing like Psycho star Janet Leigh. Still, these discrepancies would be barely noticeable if Hitchcock provided a more absorbing glimpse of the making of Psycho.

Are we really to believe, as the movie portrays, that Alma filled in at the studio for Hitchcock, who was sick at home in bed, and figured out a crucial element that had hindered the filming of Psycho’s famous shower sequence? Was this sequence not storyboarded within an inch of its life? While it’s lovely to see the woman behind the famous man gaining her proper due in history, having it occur at the expense of accurate film history creates another kind of damage. More dismaying, however, is the romance the movie creates between Alma and the screenwriter Whitfield Cook (Danny Huston), which appears to be solely concocted in order to send Hitchcock into jealous tantrums and devious machinations. Simplifying Hitchcock’s propensities for voyeurism, perversity, and sexual sublimation into a straightforward case of unwarranted marital suspicion does a disservice to the artistic process.

Long after his death, Hitchcock’s contradictions continue to hold us in his sway. Both a consummate showman and a savvy artist, Hitchcock can be all things to all people. Hitchcock is at its best when revealing such inside-Hollywood moments as the filmmaker whipping out his own checkbook to finance Psycho when the studio would not. But the lovelorn Hitchcock of this film’s fantasies would be better off left on the cutting-room floor. 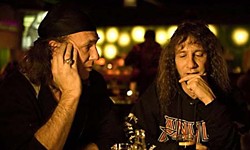 Anvil! The Story of Anvil
Rust never sleeps, and metal never dies in this doc about the band Anvil.