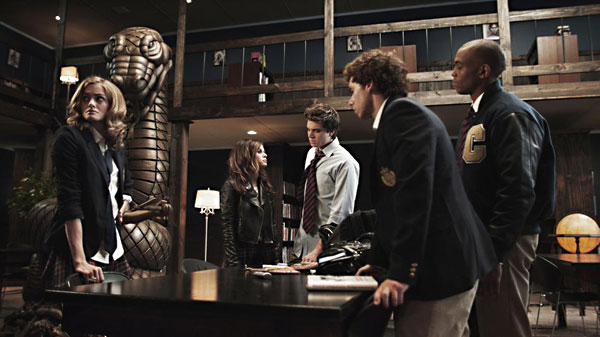 Bad Kids Go to Hell is the kind of movie its own pampered, careless, coked-up characters would make as a class project at the ass-end of senior year: boys running around with weapons, girls mugging sexy-sassy, narrative continuity be damned. A jumble of story elements from The Breakfast Club, Ten Little Indians, and Scooby Doo: Where Are You!, BKGTH lacks the maniacal pep of last year’s similarly themed Detention, and the effort to beef up runtime with long stretches of slo-mo shots only exacerbates the pacing problem.

Six private-school brats are locked in the library on a rainy Saturday. The principal (Schmidt) – who has confiscated their cell phones, but not their drugs, vibrators, or handguns – runs off with diarrhea. Unsupervised, the teens start dying off. Who are our suspects? There’s the stripper valedictorian (Alch), the pauper who throws basketballs at cheerleaders (Stewart), the jock with a broken leg (Edwards), the witchcraft-practicing Ally Sheedy type (Duke), the prom queen (Faulkner, Twilight: Breaking Dawn), and some fuzzy “ethnic” guy in the background (Donato, Degrassi: The Next Generation). Oh, and the ghost of a murdered Apache (“Before this library was built, this land was his home”).

The real mystery of BKGTH isn’t who’s doing the killing, but where the passion went in this independently produced screenplay-turned-comic-book-turned-movie by Dallas filmmakers and co-writers, Matthew Spradlin and Barry Wernick. Did they outgrow the project in the six years it took to complete? Certainly they were stymied by limited funds. Comic-book adaptations call for dozens of set-pieces, and this movie only has the budget for three or four – hence the copious slo-mo shots, a seeming effort to re-create the book’s still images.

If a high school English teacher were grading BKGTH, he or she would have to give writers points for using the thesaurus. The phrase “dead Indian” is eventually replaced with “Native-American wraith,” for instance, and the headmaster (The Breakfast Club’s Judd Nelson hiding behind a huge beard and glasses) is totally quotable: “Never before have I seen a greater blight on organized education. Like a massive gravity sinkhole, he deforms every positive thought he encounters before sucking it into a vortex from hell.” The operative word is sinkhole.

Dauntless: The Battle of Midway
World War II airborne drama is more about rescue than combat