The Collection is the follow-up to 2009’s torture-grunge picture The Collector, and time will tell if this new horror franchise will have the legs to compete with its prodigious Saw predecessor. Director Marcus Dunstan and his co-screenwriter Patrick Melton are touted in The Collection’s advertising as the screenwriters of Saws IV through VII. Make of that what you will. These guys know horror franchises, though: They were also the writers of the Feast horror films, which were the outgrowth of winning Ben Affleck and Matt Damon’s Project Greenlight reality filmmaking series back in 2005.

An exercise in pure sadism, The Collection moves at a clip that leaps over plot holes in its race to elicit fright. No weighty psychology or physical logic freights this enterprise. The Collector (Archer) remains a mysterious hulk in a black mask with crudely cut holes for the eyes and mouth. His objectives and satisfactions are unknown. He lives to pluck strangers from calamities and then torture them through various methods with the aid of surgical devices, drugs, and a vast array of Rube Goldberg-styled mechanical contraptions. How this character could feasibly have the time to erect so many elaborate killing devices throughout every room of an abandoned hotel (nicely named for Dario Argento) is beyond the realm of physical possibility. And how does he subsidize his handiwork and all those hypodermics filled with crazy-making drugs? And why does he cart a victim (Josh Stewart’s Arkin) from his last film to the site of his opening salvo in the current film?

Points have to be given for allowing this film’s central victim Elena (Emma Fitzpatrick) to be a woman who rises to heroic proportions. Using the underwire from her bra to pick a lock early in the film shows her to be the kind of MacGyver gal who might have a chance against her master trapper. The cinematography by Sam McCurdy is emotively rich, although some of the deaths happen too quickly to fully register. And sidestepped sadism is a cardinal sin in this sort of exercise. 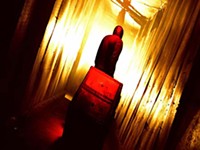 The Collector
From the writer and director of Saw 4-6 comes this horror film about a handyman who tries to rob his employers' home but finds it rigged with a lethal maze.