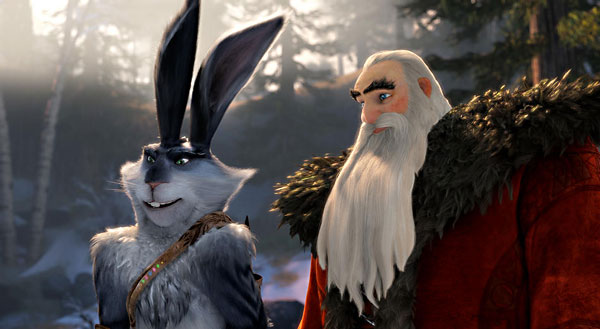 Rise of the Guardians

Kids who can stomach mixed holiday fare should be able to ride out this stereoscopic superstorm of snowglobes, Easter eggs, magic portals, enchanted crystals, moon worship, fruitcakes, matryoshka dolls, and lost teeth. Others may be confused. Despite the Thanksgiving-week release, Rise of the Guardians is not quite a Christmas movie; the action takes place sometime between Palm Sunday and Easter, though it is completely scrubbed of any reference to Jesus. It’s like a public-domain version of Cartoon All-Stars to the Rescue: Santa (voiced by Baldwin), the Easter Bunny (Jackman), the Tooth Fairy (Fisher), and the Sandman (a mute) team up with Jack Frost (Pine) to defeat the Boogeyman, aka Pitch (Law), who is threatening to enshroud the world in fear and darkness.

Adapted from author and illustrator William Joyce’s The Guardians of Childhood book series, Rise of the Guardians displays little evidence of Joyce’s acclaimed artistic hand. Last year, he won an Oscar for his co-direction of the delightfully old-fangled 2-D animated short, “The Fantastic Flying Books of Mr. Morris Lessmore,” but the visual style of this DreamWorks film, directed by Peter Ramsey with visual consulting by Roger Deakins, is retro in the worst way – borrowing whole set-pieces from Avatar, Charlie and the Chocolate Factory, and Labyrinth.

Whereas the books are set 200-300 years ago, the movie panders to present style. Jack Frost looks like a Newport Beach surfer in a periwinkle hoodie and skinny jeans, and would you believe tatted-up Santa has full sleeves? He’s got “Naughty” inked on his left arm and “Nice” on his right (perhaps an ill-considered nod to Robert Mitchum’s knuckles in Night of the Hunter). The Guardians suffer from au courant anxieties as well, including a preoccupation with maintaining celebrity, which manifests itself as a sort of fantastical Twitter syndrome: They obsessively monitor a giant LED globe at mission-control headquarters that tells them how many children believe in them at any given second.

Guardians are guilty of political mudslinging, too: Santa, the Easter Bunny, and the Tooth Fairy accuse Jack Frost of “not caring about children” because he doesn’t bring them gifts; Frost counters that the other Guardians are out-of-touch elites too busy with their own enterprises to understand kids’ needs. Their accusations make it sound as though the “big three” are Republicans and Jack a Democrat. As in actual politics, the real movers and shakers are on the periphery of the public eye: The climax of this seasonally challenged tempest comes down to a glitter-slinging face-off between the Boogeyman and the Sandman – the latter, appropriately, goes by the nickname “Sandy.”

Spider-Man: Into the Spider-Verse
Your friendly neighborhood web-head goes beyond Peter Parker

Rise of the Guardians, Peter Ramsey