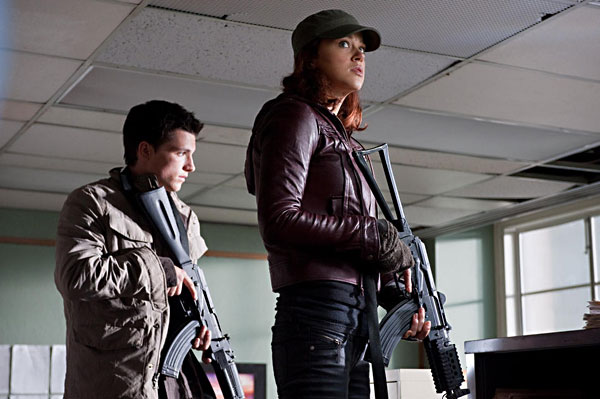 Movie remakes are rarely a good idea (at least from an artistic point of view, although there’s an arguable economic upside to trading in previously established – and therefore instantly recognizable – storylines and iconography). The original Red Dawn, John Milius’ 1984 cult classic about Midwestern teenagers who defiantly defend themselves and their homeland against Russian invasion, had earned a large enough place in the American psyche for the 2003 military operation that captured Saddam Hussein to be code-named Operation Red Dawn. When even Pentagon pooh-bahs draw inspiration from a bunch of fictional teens with guns and grit, that’s proof that the movie has become deeply entrenched in the American soul.

The 2012 remake, however, derives most of its inspiration from Call of Duty and other first-person-shooter video games, rather than the original film. Though the remake hews pretty closely to the original in terms of the plot, the filmmakers place all the emphasis on the action sequences. That seems to have been the plan from the outset, since the background of first-time director Dan Bradley is as a top-flight stunt coordinator (the Bourne films) and second-unit director (Quantum of Solace). It’s not as though Milius’ original skimped on the violent action or showed any great emotive range during the dramatic interludes, but Bradley’s version lives for the action sequences and is near-laughable during its dramatic lulls.

Filmed back in 2009, this remake was shelved due to the bankruptcy of its producer MGM. A few things happened during that time. The invading Chinese force was electronically altered to become North Korean. (In the original, the invaders were Russians and Cubans who had come up through Mexico.) Every generation has its own boogeymen and objects of xenophobic fear, and the tides had shifted while the remake gathered dust. Chris Hemsworth, the Marine on leave who becomes the leader of the renegade teens in the new Red Dawn, was yet to become famous as a big action star in Thor and The Avengers – films that were yet to be made and released. Hemsworth has since developed into a reliable action star, yet his scenes here with his younger brother (Josh Peck) are emotionally overwrought. Aside from some thin threads about missing girlfriends and such, the dynamic between the brothers is the remake’s only dramatic arc and pales in comparison with the original’s knotty relationship between the brothers – who were played by Patrick Swayze and Charlie Sheen (when he was still playing supporting roles).

And although it’s seemingly impossible, the 2012 remake is more jingoistic than the 1984 original. More declarative war cries seem to be uttered, and the totalitarian oppression of the invaders seems more ominous. Somehow, all the architecture in Spokane, Wash., where the remake is set, suddenly sports dreary, fascistic facades, making it clear what the rebels are fighting against. The original, which was set in and around the Arapaho National Forest, created a perpetually stunning backdrop, which underscored what the teens were fighting for: America the beautiful. A late-entry plot development in this new version regarding a mysterious communications shield used by the North Koreans makes little sense and, again, seems like a plot point in an imaginary video game. Although the original Red Dawn was far-fetched, the remake offers little but vicarious thrills. 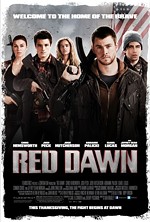