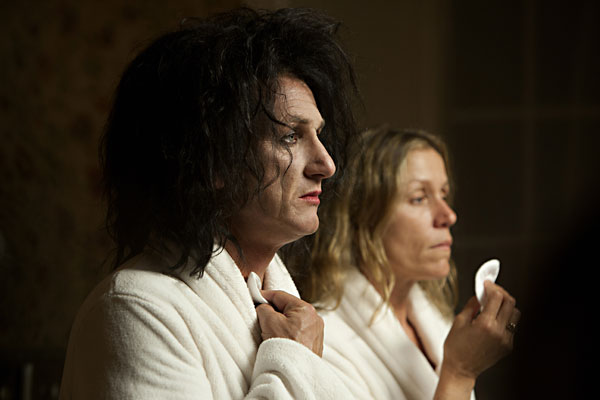 Sean Penn performs another one of his amazing transmogrification acts as the rock star Cheyenne in This Must Be the Place by the Cannes award-winning director Paolo Sorrentino (Il Divo). A goth look-alike for Robert Smith of the Cure, Cheyenne’s sky-high, shoulder-length hair drapes his face, and though he’s no longer performing, Cheyenne still makes up his face daily with red lipstick and black eyeliner. Cheyenne retired from the spotlight 20 years ago following a tragic event, and he now lives off his royalties and savvy stock investments in a modernized castle in Dublin with his wife Jane (McDormand). He speaks in an odd, high-pitched voice and has a perpetually sad, vacant look in his eyes. Jane, who works as a firefighter, is everything that Cheyenne is not: active and engaged with the world. Their 35-year-long marriage is a study in complementary personalities.

We observe these intriguing characters, and some of their Dublin friends, as they go about their daily lives. About a half-hour into the movie, a phone call informs Cheyenne that his father, whom he hasn’t seen in 30 years, is dying. Arriving in the States too late to visit his father on his deathbed, Cheyenne occupies himself with the deceased’s notebooks in which his father – a survivor of Auschwitz – obsesses over finding a particular Nazi guard who tormented him in the camp. Inexplicably, Cheyenne embarks on a road trip across America to hunt down the aged war criminal wherever he might be hiding. Various stops along the way seem, at first, inscrutable, yet are really quite focused. Cheyenne’s road trip to Michigan, New Mexico, and Utah has the feel of a Wim Wenders journey, thus it’s altogether appropriate that Wenders’ Paris, Texas star, Harry Dean Stanton, makes a poetically resonant appearance here as the man who patented the idea of attaching wheels to luggage.

Mixing faded rock glory with Nazi-hunting and American road-tripping creates an odd hybrid that is completely transfixing, although some viewers are likely to find this film an awkward mishmash. The drama, however, is consistently offset by comic underpinnings, which are well-played by the actors and seamlessly presented by Sorrentino, with the aid of striking compositions and fluid cinematography by Luca Bigazzi. David Byrne – whose Talking Heads tune provides the movie’s elliptically apt title – co-wrote original music for This Must Be the Place with Will Oldham, and also appears in the film playing himself. Like a good novel that you don’t want to end, this odd movie made me sad to part from its company. To quote the lyrics to “This Must Be the Place (Naive Melody)”: “Home is where I want to be/But I guess I’m already there.” 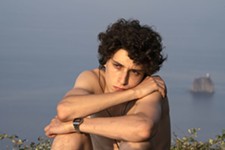