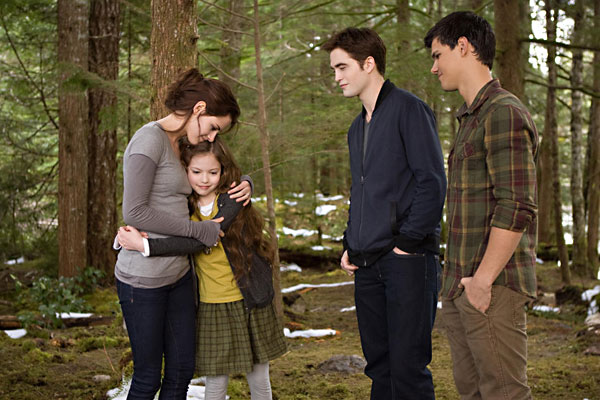 So here it is: the last installment of the Twilight saga, or “our long national nightmare,” as I and so many others have come to think of it. Part 2 picks up with the formerly human Bella Swan (Stewart) getting her first taste of vampire life, after her bloodsucker husband Edward Cullen (Pattinson) turned her to save her life after the difficult childbirth that concluded Part 1. Briefly, we see Bella get her first kill, but she returns home hardly mussed (perhaps she carries hand wipes and a hair brush?), in a prime example of the series’ continued upside-down thinking. Much as the way the Twilight films have been obsessed with sex but swat away sincere carnal desire for mixed messages swathed in a soft-focus shimmer, Part 2 sanitizes Bella’s innate bloodlust while pebbling the ground with decapitated heads, twisted off with a visceral crunch that belies the PG-13 rating.

The plot kicks in when Bella and Edward’s new progeny Renesmee – half-vamp, half-human, and weirdly recalling baby Pubert from Addams Family Values, sans mustache – is spied from afar by another vampire, who runs to tattle to the Volturi (the undead tribunal) that the Cullens bit a kid – a capital offense among vampires. The bulk of Part 2 revolves around the Cullen clan’s efforts to gather witnesses to attest that Renesmee is a hybrid – no laws broken here, guys! – before the Volturis arrive to exact a misguided justice.

There continues to be little wit or subtlety to series screenwriter Melissa Rosenberg’s scribblings (her script isn’t just on the nose – it breaks the bone), but Part 2 benefits by taking the will-they-or-won’t-they-be-together of Bella and Edward off the table. Here, they’re fully committed – practically superglued together, in fact; they can’t even enter a room without holding hands, because this is twu wuv – which allows the film’s focus to expand to other concerns, such as the United Nations of exotically accented vampires that encamp to the Pacific Northwest for battle (though, it must be said, most of these thinly sketched parts seem to exist only to satisfy reader expectations) and the surprising maturation of the werewolf Jacob, and the human playing him, too – Taylor Lautner, who’s survived six years as a critical punching bag to emerge as one of the livelier actors in this last go-round. He and Michael Sheen, returning with a delicious giggle as Volturi-in-Chief, seem in on the joke, but everyone else toes the line in this slavish, straight-faced adaptation.

Fan fiction. Those were the two words I couldn’t shake while watching this final installment. Though Rosenberg stays more or less on the beaten path of Stephanie Meyer’s source novel (with a notable exception I won’t spoil here), the film plays downright slobbery, as if assembled by a No. 1 fan and not an Oscar-winning filmmaker, in the case of director Bill Condon, who also helmed Part 1. If a late-in-the-film montage of Bella and Edward’s swooniest looks seems familiar, that’s because you’ve seen the same supercut on YouTube already, spliced together by a small army of sighing girls who may now turn those editing chops toward endeavors more worthy of them. Kiddos: I’m sighing, too, but only from relief it’s all behind us now.