Simon and the Oaks

Simon (Wächter) is a bright, imaginative child living in rural Sweden in 1939, and “the Oaks” are the trees he communes with. Beyond that, I’m not sure how much plot is too much plot to reveal, because the sometimes surprising ways the story wends mark this melodrama’s most significant point of interest. In broad strokes, then: There is the disconnect between Simon’s longings for culture, intellectual engagement, music, and sophistication, and his parents’ keep-it-simple farming lifestyle. There is the war, which impacts Simon and his city-living Jewish friend Isak (Eriksson) in different ways. There is the aftermath of the war, when Simon – now a petulant, perma-scowling teen (Skarsgård) – must choose what kind of man he wants to be.

Simon & the Oaks was nominated for 12 Guldbagges (Sweden’s Oscar equivalent); indeed, the film rather screams awards bait, with its historical sweep and careful, decorous performances. Adapting from the bestselling 1985 novel by Marianne Fredriksson, director Lisa Ohlin and screenwriter Marnie Blok do fine with the high-drama beats – the terror of a looming Nazi invasion, forbidden love, and the bad decisions an unhinged brain makes when seemingly backed into a corner. But the filmmakers fail badly in their efforts to animate the Oaks, articulating their “magic” in a clunky, corny mishmash of superimposed image and color. Significant enough to be name-checked in the title, the trees hang over the film, threatening to impose heavy metaphor on what is otherwise a straightforward family saga. 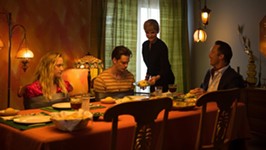