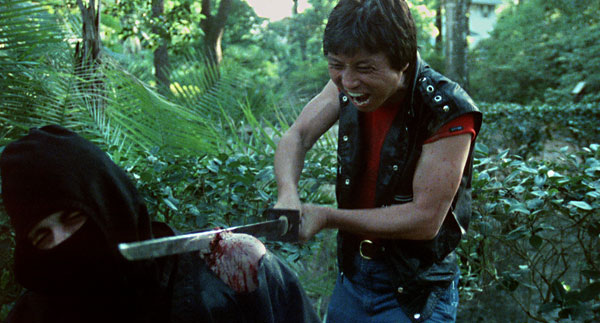 Miami Connection is the sort of film that rarely sees the light of day anymore – a really bad, totally inept mess that reeks of more ambition than talent. Made in 1987, but only released in three theatres, the film was stillborn. A couple decades later, however, Alamo Drafthouse archivist and programmer Zack Carlson bought a print of Miami Connection for $50 on eBay. And even though Carlson paid about 49 bucks too much, the folks at Drafthouse Films have now decided to release this relic on DVD and theatrically, figuring others will enjoy the film’s unintentional zaniness as much as they do.

The film is the brainchild of Y.K. Kim, a Korean emigré to Florida, who is a tae kwon do instructor and motivational speaker. Kim’s obvious hope was to become a cinematic martial-arts hero like Bruce Lee or Chuck Norris. He sunk all the money he had made from his tae kwon do empire into the film and used his students as actors. In addition to producing Miami Connection, Kim co-wrote the screenplay. The story is an incoherent mass of elements and a loving ode to Eighties kitsch. However, I don’t think anyone involved viewed it as kitsch. Miami Connection looks as though it was made by people who regarded the Eighties martial-arts movies produced by Cannon Films to be the height of style and the pinnacle of achievement. There’s not an ounce of cynicism in the film, yet even its earnest intentions can’t make it good – unless you want to judge it on the so-bad-it’s-good scale, which can be a very slippery slope. Drafthouse Films is clearly looking for Miami Connection to become a midnight-movie sensation and, indeed, this is the sort of film that will make modern audiences howl.

So, plot? Very difficult to say with any certainty. There’s a band called Dragon Sound that plays bad synth pop. It’s music is written by a Yanni look-alike (Janotti). The band gets a club gig, which launches a street fight with the band they replaced. The girl singer is the sister of a drug underlord who tries to break up her relationship with one of the guys in the band. Another guy, midway through the film, announces that he’s been looking for his absent father, to which a fellow band member and the film’s nominal star, Kim, replies in his difficult-to-understand English, “I thought we were all orphans.” What?! Then there are the ninja motorcycle-riders who are involved with the drug trade. Nonsensical dialogue, painful acting, lots of strobe lights, and even more fighting – what more could a person want? Perhaps a beheading? Miami Connection has that, too.