Candyland meets Tron by way of Nintendo's Donkey Kong, a sweet splash of treacly Disneyana, a dollop of Pixar's Cars, and a gooey series of sugar-bomb, high-fructose, racing set-pieces that very nearly sideswipe the Wachowskis’ Speed Racer: Such are the ingredients of Wreck-It Ralph. I don't know about you, but I'm flossing extra hard this evening and ringing up my dentist in the morning just in case.

As gloriously colorful as Wreck-It Ralph is – and it's nothing if not a CGI'd Spirograph of glowing, candyfloss-saturated hues – the storyline is allegedly where it's at. I say "allegedly" because co-screenwriters Jennifer Lee and Phil Johnston have overstuffed their script with at least one plot string too many. This sort of gorging on the various strands of saccharine Disney tropes only serves to weaken what starts out as a terrific idea. The end result isn't a disaster, but it is unfocused, and too many of the gags hit with all the punch of a well-suckled gumdrop.

Reilly does a fine job voicing the titular Ralph, the "bad guy" character in a fictional video game called Fix-It Felix Jr. (That'd be a riff on Donkey Kong Jr., and boy, are there ever a lot of not-so-hot gamer in-jokes here.) Fed up with being the game's villain for the past 30 years, Ralph dreams instead of being a hero and winning the coveted gold medal that Felix (McBrayer) continually scores. Miffed, Ralph abandons his own game and crosses over to others: Initially, it’s the bug-infested, first-person shooter Hero's Duty – a mash-up of Call of Duty, Gears of War, and, I think, the Halo series – and from there into Sugar Rush – a Wonka-fied go-kart racer aimed at a far younger audience. While there, he meets Vanellope von Schweetz (squeaky, smart-ass Silverman), a "glitch" in the ordained gameplay who just wants a chance to go fast like all the other pint-sized avatars. The pair form a wary alliance – Vanellope has stolen the gold medal that Ralph stole from Hero's Duty, so there's rancor to overcome – and, hey, what do you know, they both learn some serious life lessons. (Admittedly, thankfully, nothing on a par with what Sam and Flynn had to deal with in Tron: Legacy.)

I suspect many of the old-school gamer references will rocket right over the heads of younger members of the audience – Q*bert, House of the Dead, and Street Fighter characters all put in momentary appearances – but the Shrek-y "be yourself no matter who you are" vibe grates, although I suppose it never grows old when you're 10 years old. That said, a blink-and-you'll-miss-it cameo from Cats, of the Zero Wing meme "All your base are belong to us,” is alone nearly worth the price of an illegal Pirate Bay download, because, you know, Anonymous likely wouldn't be caught dead at an actual screening of Wreck-It Ralph.

Sweet enough but in the end a bit of a corny-syrupy wipeout, this is middling family-night fare, but it never even comes close to the emotional or technical wizardry of Pixar's finest moments. 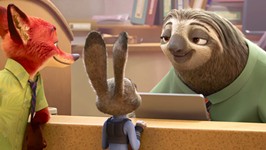 Zootopia
These animated Disney critters are fun, topical, and inclusive