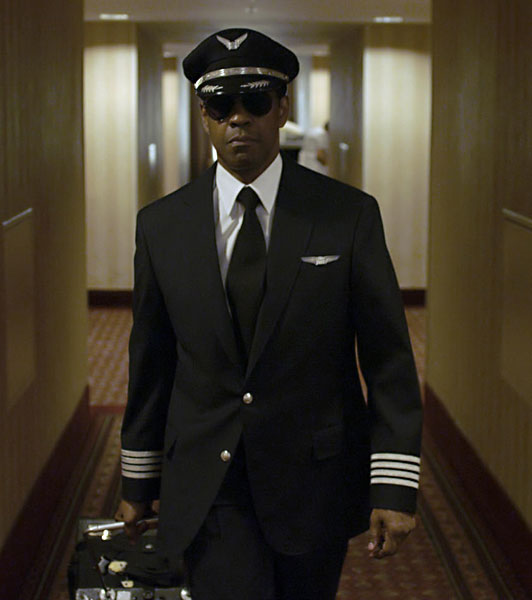 For the first half-hour or so, Flight keeps us rapt with thrilling action and a troubling moral quandary. You strap in for the next two hours and prepare to give yourself over to the in-flight entertainment. But after Flight descends from its high-wire act and becomes more earthbound, the film reshapes itself into a fairly standard story about a substance abuser and his difficulty getting permanently sober.

The opening scenes are terrific. Commercial airline pilot Whip Whitaker (Washington) awakens in a hotel room where it is evident he and an attractive flight attendant have spent the night indulging in sex, booze, and cocaine. Duty calls, however, and another copious line of coke gets Whip out the door and on the way to the airport where he has an early departure. In the cockpit, ready for another on-time takeoff (Whip’s on-time record is something he’s quite proud of), he takes a few hits of oxygen from the mask by his controls. All your worst fears about pilots unfit to fly are suddenly staring you in the face. Yet, the wrinkle in this kneejerk thinking is that Whip Whitaker is exactly the pilot you want steering a plane that’s experiencing massive mechanical failure – which is what happens to Flight 227 shortly after Whip deftly downs a couple more airline bottles of vodka and has ceded control to his co-pilot. The aircraft suddenly loses altitude and Whip manages to land the damaged plane via crazy, instinctive measures. Six lives are lost, but the vast majority of passengers and crew survive. In simulations, 10 other pilots were presented with the same malfunction that Flight 227 experienced, and every one of the pilots’ planes crashed. Whip is indeed a hero. Yet he is also a high-functioning alcoholic who had a .24 blood-alcohol level when he was pulled from the crash. Reconciling those two facts is an interesting dilemma, and one that becomes a growing factor in the ensuing crash investigation. The film’s exciting first half-hour is intercut with the seemingly unrelated actions on the ground of a junkie named Nicole (Reilly) who is trying to score and then fix. We don’t learn who she is until Whip winds up in the same hospital as she’s in following an overdose. Nicole starts going to AA meetings and cleaning up, but Whip continues to self-destruct. Nevertheless, their lives continue on parallel paths until the end of the movie. Flight’s pat closing sequences are at odds with the complexities presented earlier on. They travel the conventional route and threaten to vastly simplify this story into one of an addict’s redemption. Perhaps it was inevitable that the drama on the ground could never equal the excitement of the action that occupies the movie’s beginning sequences. Yet many are the stellar performances among the film’s ground crew, which break up the midsection’s alcoholic slog. Cheadle, as the lawyer hired by the union to represent Whip, and Goodman, as Whip’s dealer, are real standouts, as is James Badge Dale in his one scene as a cancer patient. However, the film’s overblown soundtrack does unsubtle things, like introduce Goodman’s character to the strains of “Sympathy for the Devil” or blare “Feelin' Alright” as soon as Whip snorts up and heads off to work. In his first live-action feature since Cast Away in 2000, Zemeckis (Back to the Future, Forrest Gump) shows he still has a vivid visual sensibility and a finger on the zeitgeist. But the script by John Gatins leaves nothing up in the air and returns all the tray tables locked in their upright positions.