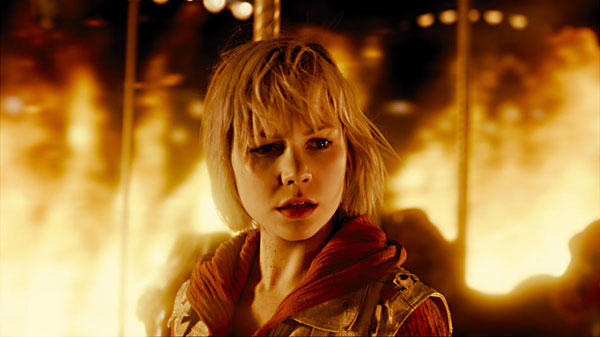 Without the atmospherically batrachian fun of 2006’s Silent Hill, this turgid and wholly unrevelatory semisequel is August Derleth to the previous film’s H.P. Lovecraft. A knockoff in everything from style to story, it also suffers from 3-D effects that are dim and underwhelming, a maddeningly obtuse storyline, and performances that could have used some serious Herbert West-style reanimation. I realize it’s called Silent Hill for a reason, but enduring this botched (video game-based) nightmare is like sleepwalking into the world’s dullest Halloween party.

Aussie newcomer Adelaide Clemens is Sharon (played in the original by Jodelle Ferland), who is now 18 years old and on the run – with dad (Sean Bean) in tow – from the evil forces of the first film. After pop is kidnapped by the demon cult and transported back to the netherworld, Sharon – who, as in the first film, is not who she thinks she is (or is she? Arrgh! My mind!) – returns to the haunted hell-town to save him, or confront her evil twin, or be freaked out by the faceless demons, or … who knows? Or, for that matter, cares?

Malcolm McDowell, Carrie-Anne Moss, and (Hal Hartley regular) Martin Donovan all make cameo appearances that reek of boat-payment gigs, but the real crime here is just how much this particular entry in the not-quite-a-franchise feels like a video game. Characters pop in and out with assorted bits of long-winded exposition that are necessary for the heroine to make it to the next scene (read: “level”), but even that fails to coalesce into anything that might create a proper shudder. Christophe Gans’ 2006 Silent Hill is the Citizen Kane – or possibly The Magnificent Ambersons – of Silent Hill movies compared to this flaccid, dumb, and wicked-boring sequel. Bereft of the eerie, dreamlike quality of Gans’ film, this is just plain lazy filmmaking, which, when it comes to horror films adapted from video games, means: Expect a sequel. With any luck, we’ll have even more time to choose to ignore it when it finally arrives. (Shhhh! Don’t jinx us!)