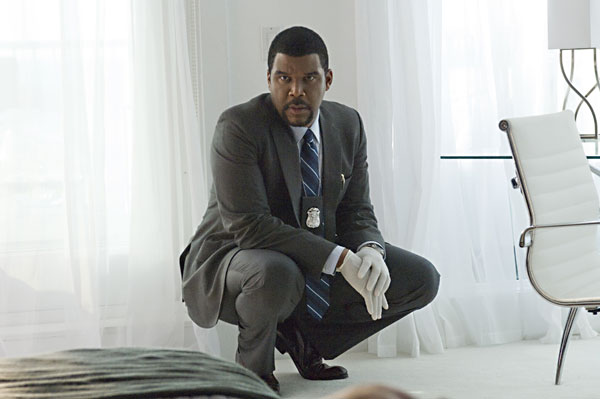 Based on the eponymous creation of James Patterson, the author your mom loves to read, Alex Cross is the third theatrical incarnation of the whip-smart FBI profiler played previously by Morgan Freeman in Kiss the Girls and Along Came a Spider. This time, however, the role is taken on by the hulking Tyler Perry, who steps so far out of his in-drag Madea comfort zone that it feels, at times, like we’re watching a Saturday Night Live parody of a Patterson pastiche.

It’s a courageous but misguided move on Perry’s part; he has none of Freeman’s soulful, nuanced subtlety, and watching him display the gamut of emotions called for in Marc Moss and Kerry Williamson’s script is like watching the Hulk attempt Swan Lake. Set up as a prequel of sorts to the Freeman films, Alex Cross does make fine use of its Detroit locations, from tony Lakeview Drive mansions to the skeletal ruins of the former Michigan Theatre in debris-strewn downtown. (The climactic fight sequence that takes place here is more of a disaster, editing-wise, than the Argento-esque catwalks and lachrymose layers of endless shadows.) Cross is still a detective with the Detroit Police Department in this film, although an offer to move to Washington, D.C. (where Patterson’s novels take place) is mentioned early on amidst an ongoing barrage of strenuously overwritten buddy/pal banter with his partner Tommy Kane (Burns, who’s as bland as Wonder Bread).

Enter the sinuously evil serial killer Picasso (Lost’s Fox, looking like a cross between Inglourious Basterds’ Cristoph Waltz and, um, me, apparently), a sadistic and cunning killer who attracts Cross’ attention, and vice versa. Like Perry, Fox overplays his character to the point of parody, but at least he looks as though he’s having some fun carving up people. Perry just looks apoplectic, and there are odd moments that seem imported straight from Planet Madea, too, such as Cicely Tyson’s wise old Nana Mama and Perry’s hunky-dory relationship with his family (no work-stress alcoholism or battered-wife syndrome here).

It’s a mess, really, but a crowd-pleasing one. There’s no telling how Perry’s regular audience will react, but my guess is they’ll follow him out on this creaking limb, no problem. Whether anyone will ever want to see him portray Patterson’s profiler again, though, is another question altogether.

From the Vaults: James Patterson on Film
Reviews of 'Alex Cross,' 'Along Came a Spider,' and 'Kiss the Girls'