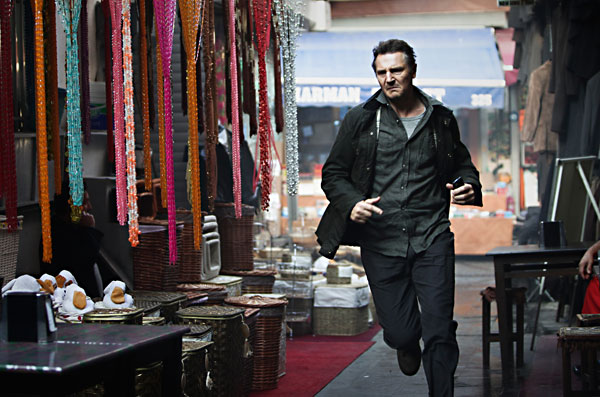 Liam Neeson gets to dig deep into his Darkman roots with this superanimated sequel to 2008's Taken. Like its uninspired but succinct title, this competent actioner gets straight to the point with a modicum of exposition. It's a solidly built little thriller, and it's always a gas to watch Neeson work through his gallery of scowls, glowers, and grimaces. Neeson is not by nature an action superstar in the Bruce Willis mold, and although various directors have tried to ignore that fact, watching him go crackers and blow cantaloupe-sized holes in bad guys is like watching a Muppet on bath salts. Fun, but, you know, don't get too close.

Neeson is again cast as Bryan Mills, a former U.S. overseas operative/assassin/badass who, as Taken 2 begins, is seen watching the clock on his Toyota's dashboard as it ticks off the seconds to a meeting with his daughter Kim (Grace, reprising her role from the first film). Bryan's punctiliousness and strident perfectionism are something of a running gag throughout the film – time is always of the essence in his world – and his reconnection with ex-wife Lenore (Janssen) and Kim is constantly being thrown off-balance by his clockwork inner self. Not for long, though, as the Albanian brothers and fathers of the white slavers he offed in the first film soon come calling with vengeance in their eyes and Glocks in their meaty paws.

Led by the great Croatian actor Rade Serbedzija, the thugs kidnap Kim and Lenore, sending Bryan into invincible MacGyver mode. Much running and leaping across the rooftops of Istanbul follows, as does a nifty and prolonged car chase through that city's donkey-cart-narrow avenues. It may lack the precision of a Bourne movie, but Taken 2 scores points for both its breathless pacing and the key moral quandary at the heart of the story: the fact that Neeson's ex-spy and Serbedzija's anguished and vengeful father aren't, when you get right down to it, ethically that far apart. They're both stone-cold killers, and they're both prepared to fight and die for their already tattered familial bonds.

This being a film co-scripted by Luc Besson, the action is frenetic and frequent, and the whole film has a vaguely Eurotrash vibe. It's fun enough on its own relatively low-budget merits, but it's really nothing to die – or kill – for.