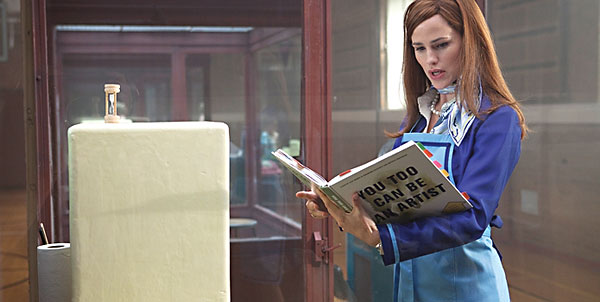 Butter has been sitting on the shelf for more than a year, but the film hasn’t yet reached its expiration date, especially when you consider its subtextual parody of American politics. What it’s saying about American politics isn’t exactly clear, but there’s no doubt the film’s protagonist, Laura Pickler (Garner), borrows the wardrobe and speech patterns of Michele Bachmann in the course of the character’s drive to win what she views as rightfully hers. With Bachmann no longer as prominent a figure in our daily political diet, perhaps the marketers at the Weinstein Company are hoping we can now embrace the film’s caustic comedy, which can be quite funny, without posing those persnickety questions about how it relates to our democratic system.

Bob Pickler (Modern Family's Burrell) is called the “Elvis of butter” for his way with carving butter sculptures of everything from Schindler’s List to “The Last Supper.” But after 15 years of winning the Iowa state championship, he has been asked to put down his trowel and give someone else a chance. His wife Laura (Garner) objects, however, viewing those trophies every bit hers in her role as the artist’s helpmate. She's the kind of person who hides her venom behind her pert smile and pearls. Laura is a character who has drawn frequent comparisons to another fictional Midwestern go-getter: Election’s Tracy Flick, whose smile and good manners also disguised her win-at-all-cost ambitions. When Laura discovers her husband philandering with a hooker named Brooke (Wilde, who steals every one of her scenes), she decides to retaliate by taking up the trowel herself and entering the contest. Not to be bested, Brooke also enters, although both women’s arteries to success are clogged by the prowess of the butter-carving natural, Destiny (Shahidi), a young African-American orphan living with new foster parents (Corddry and Silverston) in Iowa. Hugh Jackman also appears in a throwaway cameo as a dim-witted car salesman who is Laura’s old flame.

Garner hasn’t come across as amusing as she is here in quite some time. Despite many funny bits, Butter also, at times, seems to excoriate the blinkered Midwesterners in the flyover states. Based on first-time screenwriter Jason Micallef’s award-winning script, the film vacillates in tone with humor that’s sometimes sweet and sometimes venomous. There’s a lingering sense that these Iowans and their butter-art obsession are expendable targets who won’t hear us laughing at them. Nevertheless, Butter contains enough genuine levity to slide down easily. 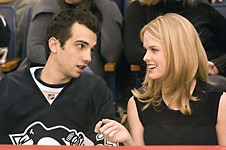 She's Out of My League
An average guy finds the woman of his dreams, but his insecurities undermine the relationship.